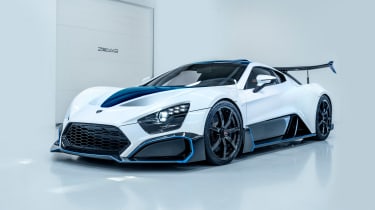 If the forthcoming Aston Martin Valkyrie and Mercedes-AMG Project One just aren’t exclusive enough for you, the Zenvo TSR-S could be just your thing. Having made its debut at the 2018 Geneva motor show, this latest version has received new gearbox tech, alongside unique carbonfibre components.

Conceived as a road-legal version of the track-only TSR – ‘S’ is for Street – the TSR-S is equally at home on track or road, according to Zenvo, due to the car’s configurability through adjustable performance settings. The latest car to roll out of the factory gates has been fitted with hybrid assistance, freeing up space for an additional gear for forward motion by employing an electric motor for reverse.

Also unique to this commission are ‘full fragmented’ carbonfibre wheels that are 15kg lighter than aluminium equivalents for less unsprung mass. Blue tinted carbonfibre trim can also be found throughout, using a unique geometric weave design to set it apart from a mere standard car.

All TSR-Ss boast a mid-mounted 5.8-litre twin-supercharged flat-plane crank V8 with three available power levels. ‘Minimum’ offers 700bhp, ‘Maximum’ 1177bhp, while ‘IQ’ continuously monitors the grip on offer and deploys the right amount of power accordingly – anything up to the full complement. Maximum torque is a generous 811lb ft.

Drive is channelled to the rear wheels via an eight-speed paddleshift gearbox (seven-speed on the pre-hybrid cars) made up of helical-cut dog gears. There are two gearbox settings: Road and Race. With the former mode, clever electronic control of the shifts helps remove some of the harshness associated with this type of transmission, while the latter mode takes full advantage of the straight cut-gears, ramming home shifts with race car speed and brutality.

The advanced powertrain makes for staggering performance: 0-62mph takes just 2.8 seconds, 0-124mph is dispatched in 6.8 seconds, and there’s an electronic limiter at 202mph. To haul the TSR-S down from such speeds are carbon-ceramic brakes. 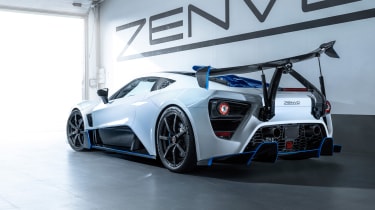 Zenvo claims the TSR-S generates three times as much downforce as the TS1 GT hypercar from which it evolved, and much of this is down to the R-S’s ‘centripetal wing’. This active rear wing can move from fully flat for minimum drag to an upright position when acting as an air-brake. However, what sets it apart from other active systems is its capacity to tilt from side to side during cornering. So in a left-hand bend the left-hand side of the spoiler lifts, and through a right-hander the opposite happens. This system is claimed to generate an inward force that pushes the car into the bend.

That’s not the only benefit, because Zenvo claims the car rides flatter under lateral loads, boosting grip of the inside tyre. Kasper Berthu Damkjær, who handled the aerodynamics on the TSR-S, explained the benefits: ‘When the wing is tilted, downforce is only decreased by 3 per cent, while an inward directed force of 30 per cent of the wing downforce is generated.’ 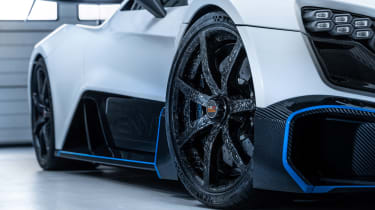 Elsewhere, other aerodynamic elements contribute to the high levels of downforce. The front splitter improves front-to-rear downforce distribution by channelling airflow under the floor, small cutouts behind the front wheelarches relieve pressure below the underbody, reducing lift, and the rear diffuser serves a similar purpose and cleans up airflow around the rear wheels to increase stability.

Unsurprisingly, Zenvo has made extensive use of carbonfibre: all the body panels are in the lightweight material, as is the intricately designed headlight housing, which like on a McLaren Senna also incorporates a functional air duct to reduce drag.