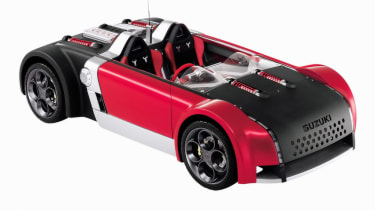 Suzuki’s cars and motorcycles are one of the automotive industry’s most striking juxtapositions. On one side, sensible, frugal small cars rarely given a second glance by enthusiasts; on the other, some of the barmiest superbikes on the market and long history of racing success.

Suzuki has rarely felt compelled to combine the two, though we’ve seen flashes of sporting potential in cars like the Swift Sport, and the Cappuccino of the early 90s. But back in 2001 we got our best taste yet of what a hardcore Suzuki sports car might be like, in the shape of the GSX-R/4.

GSX-R implies motorcycling, 4 suggests a higher-than average wheel count. Making its debut at the Frankfurt motor show in 2001, inspiration clearly came more from Suzuki’s motorcycle range than it did from any car the company was selling back then, not least in the engine bay.

Power came from a mid-mounted 1.3-litre four-cylinder. Importantly, the 1.3 chosen wasn’t from the dreary Ignis supermini but the double-ton-nudging Hyabusa sports bike, and therefore developed 173bhp at 9800rpm. The sequential gearbox too was a motorcycle component, activated by a beautifully-crafted lever on a central spar between the two seats. 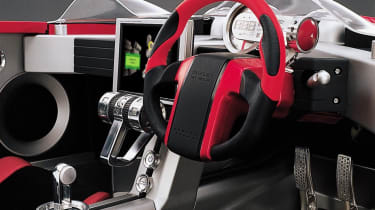 Further two-wheel influence could be found in the chassis, a motorcycle-style spaceframe formed from aluminium to keep weight to a minimum. At 640kg it undercut the contemporary Lotus Elise by around 140kg, aided by minimal bodywork and a complete disregard for potential weather protection.

Some of the GSX-R/4’s most striking visual details were its horizontally-mounted coilover spring and dampers, acting on pushrods like those of a race car. With such vestigial bodywork, each unit sits in its own cutaway in plain view.

The interior was basic, though the prescient use of a central display screen lifted it above Elise-style unsophistication and a tiny motorcycle-style instrument pod lent further clues as to the car’s heritage.

It is, sadly, a concept Suzuki has not returned to in the past 15 years. Given the rise of dedicated track cars from the likes of Vuhl, KTM, Radical and more, perhaps now would be the perfect time to invoke greater collaboration between Suzuki’s car and motorcycle divisions.

Given the 1340cc engine in Suzuki’s current range-topper – the Hyabusa Z – develops 194bhp, the resulting product could be even more extreme than the GSX-R/4.