Five-door Suzuki Swift Sport on sale in the UK

For the 2013 range update, Suzuki has added a five-door Swift Sport to the line-up, as well as a Panda-rivalling 4x4 model 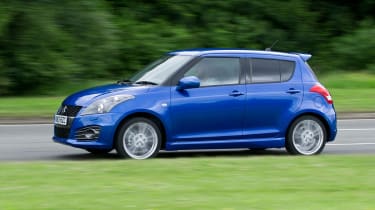 Suzuki has introduced a new five-door variant of the Swift Sport as part of its 2013 model update. The five-door variant is priced at £14,249 joining the equivalent £13,749 three-door Sport - on sale since January 2012.

The five-door boasts the same performance as its three-door sibling, equipped with the same 1.6-litre 4-cylinder engine producing 136hp at 4400 rpm and hitting 62mph from a standstill in 8.7 seconds. Combined fuel consumption of 44.1mpg and emissions of 147g/km also remain unchanged. Hot-hatch enthusiasts will be pleased to hear that the five-door car retains the six-speed manual gearbox and twin exhausts also seen on the current three-door.

Find a used Swift Sport on evo Cars for Sale

Despite retaining all of its sporting credentials, the five-door introduces an enhanced element of practicality to the Sport Swift range. The car features an impressive amount of equipment as standard, including auto air conditioning, cruise control, HID Projector headlamps with headlamp washers and Bluetooth connectivity.

As a further part of the 2013 model update Suzuki has announced the imminent arrival of the Swift 4X4, which is to go on sale for the first time in the UK next month – offering a genuine rival to the similarly sized and priced Fiat Panda 4x4.