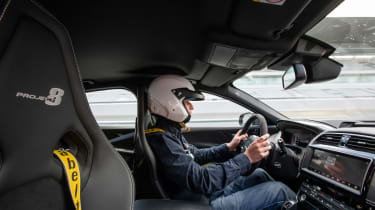 Project 8 is thirsty. Oh boy, it’s thirsty. Officially, it’s capable of 25.7mpg combined, but at anything other than a steady, low-revs cruise this seems somewhat optimistic. On a recent drive we saw just shy of 13mpg, and while the normal owner’s experience will probably end up somewhere between those two numbers, potential figures in the low teens shouldn’t be ignored.

At 254g/km of CO2 the car somehow sneaks into the second-from-top tax band, meaning a first-year rate of £1815 and £465 a year for the following five years, owing to a list price considerably above the £40k cutoff.

The Cup 2s won’t be cheap to replace either once you’ve burned through a set, though in our experience the Michelin rubber puts up a pretty good fight even on track, so as a car unlikely to be used daily, changes shouldn’t be too regular.