Batteries hate the cold, right? So how long can an electric car run in temperatures well below zero? John Barker finds out in a Tesla Roadster Sport on a frozen lake 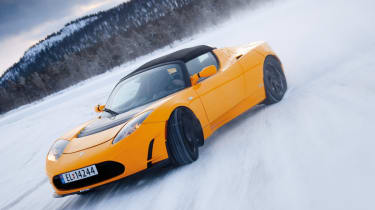 Uh-oh. This Tesla isn’t going far without some assistance. I remove a thick glove, fish my mobile from an inside pocket and find that it’s completely dead. Heck, it was fully charged just a couple of hours ago. Still, as we all know, batteries don’t like the cold and up here in the wilds of Norway, it’s minus 18deg C. Bringing an electric car here sounds nuts, but it’s not a lack of amps that’s stopping us having fun, it’s brake pads frozen to a front disc. We need the Tesla technician with his hot-air gun again.

The moisture locking the front-left hasn’t come from the air because this is a breathtakingly dry cold; it catches in the back of your throat as you step outside and makes fresh snow squeak beneath your boots like polystyrene. The wheel is locked because I got far too ambitious and buried the Tesla and its warm brakes into one of the snow banks that line the nearby 4km ice circuit. All credit to Tesla; not only has it brought us somewhere really cold to show how well the Roadster’s batteries perform, it’s also given us the chance to try and drain them as fast as possible by booking us in on a trackday on a frozen lake. It’s the sort of thing the team would do on MythBusters.

When we pick up the Tesla from near our hotel earlier that morning, it’s fully charged after having spent the night plugged into the mains in the (ironically) wonderfully aromatic, oily workshop of a local garage. Wearing every item of clothing I’ve packed over a base layer of thermals, I feel bulky as I fall into the driver’s seat, but I’m pleased to find there’s enough room in the footwell to operate the pedals in my hiking boots. Thank goodness I won’t need the slipper-thin race boots I’ve packed.

The Tesla’s familiar, near-silent getaway is soon replaced by the shoosssh of its tyres cutting through the snow. I confess that car-plus-white stuff turns me into a kid and I can’t wait to discover how the Elise-based Roadster handles here with 450kg of batteries in its tail. Within a few hundred metres I’ve found the traction control button and I’m testing the only modification to the car – a set of Nokian Hakkapeliitta 7s, a short-studded winter tyre.

Electric motors deliver maximum torque from zero rpm and, this being the ‘Sport’ Roadster, there’s even more instantly delivered urge for the rear tyres to deal with – 295lb ft to be precise. The more tightly wound motor delivers 299bhp, but the mass over those Nokians does a pretty good job of nailing the car to the road, as progressively deeper throttle lunges show. And then it’s free and we’re crabbing up the road for yards and yards. Woo, and indeed, hoo! Bring on the ice circuit!

How long will the fun last? The full-charge, just-out-of-a-warm-garage ‘optimum’ range was 381km (237 miles), according to the Tesla’s display, while the current range prediction is 264km (164 miles). The revelation that comes quickly is that the sole source of power is the vast battery pack at your back. Just as you’re acutely aware of the body heat you are losing when you take off a glove to, say, find your dead mobile, so the Tesla’s ampere gauge, which indicates the draw from the battery, makes you aware that the battery is the sole source of energy in the car. At rest, the headlights and heater together take 8 amps. Turn off the heater and the draw drops to 1-2amps.

Contrary to received wisdom, the battery pack in the Tesla works just as well in these sub-zero temperatures as it does in a hot climate, if not better. Tesla has spent millions of dollars experimenting with batteries and uses that knowledge to produce what it describes as ‘the happiest batteries in the world’. They work best between -20 and +30deg C, and some of the charge is invested to keep them at the optimum temperature. The draw can be greater keeping them cool in a hot country than it is to keep them warm in a cold climate, as rapidly discharging or charging generates heat. I intend to do my best to keep them warm.

We arrive at the ‘circuit’ to find a flat, 360-degree view. If this was summer I’d be sinking in the middle of a lake. I look down and, slightly alarmingly, see that the glassy, near-black ice swept clear of snow is shot through by some thick, darker veins. On closer inspection, these prove to be large cracks. My stomach does a nervous summersault. Tesla’s European sales director, Esben Pedersen, assures me that the ice is at least 40cm thick, adding that when the lakes freeze they become public rights of way. It must be safe, then.

The trackday begins and on my first lap I find an Audi A3 buried deep into the snow bank at the first corner. I’m not surprised – it does come at the end of a 1.6km straight. Yep, a one-mile straight. And even on short studs the surface is inconsistently grippy beneath the Tesla’s wheels. Oddly, the Hakkapeliittas are better on the dark ice than on the snow-covered bits, and it takes a couple of laps to figure out where these bits are and quite a few more to learn the circuit. Then there’s the car.

It’s quite tricky because of the changing surface and because, 911-style, some 60 per cent of the Tesla’s weight is over the rear. This gives excellent traction so it is quite effective if driven ‘normally’, but given where we are, I have an overwhelming desire to drive like a Scandinavian rally driver…

The Tesla’s traction control works both ways, preventing the rear wheels spinning up when you nail the throttle and stopping them from locking up when you snap it shut. TC switched off, the overrun torque usefully steps the back out on corner entry, to help turn the nose in, but you’ve got to be soooo precise when you get back on the throttle to maintain the slide but not spin. The throttle is remarkably linear in its response, which helps, but because of the changing surface it’s easy to find yourself on full opposite lock, pointing at a snow bank, hoping you won’t spin.

There’s a wonderfully bizarre range of vehicles taking part, including a Ferrari FF, a Gallardo and a Camaro convertible. Being overtaken by one of the Imprezas sporting what look like space-savers shod with spiked bicycle tyres is thrilling; inside the quiet cockpit of the Tesla you can hear the driver working the throttle as they catch you, then you watch the car swing and drift at close quarters until you’re in its wake and suddenly blinded by a cloud of glittering snow.

In the Tesla, the mile straight is as big a challenge as the twisty bits. Countdown boards start 300 metres before the slight right then full 90 left at the end, so what are you going to do but go flat out and dare yourself to pick a late brake point? The surface is far from smooth so it’s an approximate straight line as the Tesla rides the grooves and tracks in the snow, motors whining strongly enough to be heard over the sound of snow and ice dashing off its wheelarches and underside.

It keeps on accelerating until we’re doing well over 100mph, after which I’m focused on my brake point, the 300m board. I hit it… and moments later realise I might be carrying a terminal amount of momentum. ‘Oh. Aaaah. Ooooh. Please, no,’ I have time to say as I sail towards the turn. I’ve plenty of time to wonder if cadence braking might help the anti-lock, and it does! Hurrah! We make the first turn with a bit to spare. However, I only know this because we don’t thump into a snow bank – alarmingly, when I hit the brake the heater stopped working and the screen misted up and instantly froze into opaqueness on the inside!

It’s as if all the energy has been sucked from ‘non-vital’ functions to pamper the battery, which has gone from maximum discharge to maximum regen charge in an instant. ‘Make sure the air conditioning is on,’ is Pedersen’s advice when I relay this back in the paddock. It works: next time I can see clearly that I really have braked too late, and get to feel exactly what the Audi driver did as I plant the Tesla broadside (never give up!) into the snow bank. Happily there’s no damage.

There’s very little charge, too. Dropping the Tesla back at the local garage for a recharge we find one of the Imprezas refuelling. You can’t splash-and-dash an electric car yet; the minimum charge time is coming down but even with Tesla’s high-performance charging (70 amps at 240V) it still takes two to three hours. With a UK domestic supply, it would be six. The big reduction will come when charging switches from AC to DC current, which Tesla says it’s close to cracking.

There’s no question that the Tesla Roadster works at sub-zero temperatures, though. We’ve covered about 170km (105 miles) on a full charge, which feels about right. ‘The range depends very much on driving style,’ says Pedersen. ‘Around this track we’d expect between 150 and 200km; the more time you spend sideways with the wheels spinning, the shorter the range.’ In which case, I’m slightly disappointed we went that far.