Tesla has opened a new dealership in London, and has announced its to sell the Model S hybrid saloon next year. Details, pictures and UK pricing here 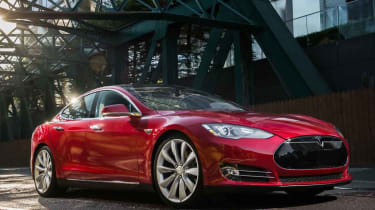 Tesla has announced that it will start to sell its Model S saloon models in the UK next year, following the opening of its new London dealership.

The fully electric Model S, available with either a 60kWh or 85kWh battery pack, has been priced from £49,900 – which includes the £5000 government grant for electric cars. The model fitted with a larger 85kWh battery pack comes in at £57,300. The top model, with a high performance motor, tops out the range at £68,700.

Offered for the first time in right-hand drive, the Model S boasts a maximum range of 310 miles. Deliveries are hoped to start from March next year, with orders for the congestion charge-exempt car being taken now.

The US manufacturer has previously had limited success in the UK with its first car, the Tesla Roadster, but with the addition of a new dealership and the much more developed Model S saloon hopes to change this.