US tuning firm Saleen has tweaked the electric Tesla Model S, to unlock some more of the car's performance potential. 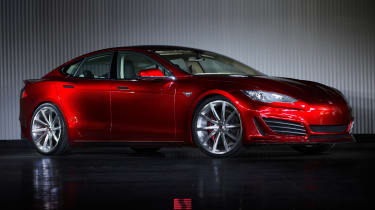 Saleen might be best known for its work on American muscle cars, but its latest project, the FourSixteen, is based on a car Saleen describes as an 'entirely new class of American automobile' - the Tesla Model S.

Far from a badge-and-bodykit job, the company has carried out changes to the Tesla's drivetrain, running gear and interior, as well as designing new bumpers and body panels to optimise the car's aerodynamic performance.

Styling enhancements start with a new front end that drops Telsa's characteristic blanked-off grille and replaces it with a sharper front bumper design, incorporating vents and aerodynamic elements. While the standard car's headlights remain as they were, the bonnet sitting between them has been sculpted to aid downforce and direct hot air away from the car - a major target for the new project.

A rear bootlid spoiler further increases downforce while a new carbon fibre rear diffuser helps direct airflow from underneath the car. Bodywork changes are subtle but surprisingly numerous - even the Tesla's doors have been reprofiled, now featuring a strong tornado line beneath the pop-out door handles.

Underneath, the FourSixteen is based on the range-topping Tesla Model S Performance with an 85 kWh battery pack. The power source remains unchanged but the car's electric motor is now hooked up to an 11.39:1 final drive to boost acceleration. A revised cooling system with a high-volume radiator and larger cooling fans ensures the car remains cool, even given the extra performance potential. Traction, already enhanced a set of Saleen-designed alloy wheels and ZR-spec tyres, is also improved with a locking differential.

As Saleen expects many of its customers to take their cars on track - electric or otherwise - the firm has tweaked Tesla's standard stability control system to allow the driver greater control of the throttle as cornering speeds increase. A track-calibrated suspension setup with coilover springs and dampers and an anti-roll bar improves cornering agility, and Saleen also offers an adjustable setup to let drivers choose between road and track settings.

Reining in the extra speed is a set of 14-inch, two-piece aluminium vented brake discs with multi-piston calipers and performance pads. Once again, those serious about their speed can upgrade to a carbon ceramic system, which also sheds a little unsprung mass.

Inside, Saleen has ripped out the standard Model S trim and replaced it with two-tone leather and Alcantara upholstery. Seats, door panels and dashboard are all stitched by hand, while front and rear seats feature reprofiled bolsters for extra cornering support. New to the Model S is a centre console unit that serves up a cupholder, storage space and a cubby hole for electronic gizmos.

For all this, Saleen asks $152,000 (c£90,900), or about £34,000 more than the Performance-specification car's base price in the U.S. That sounds hefty, but Saleen covers the work with a 4-year/50,000-mile warranty to match Tesla's own limited warranty. Once an order is placed, buyers can expect their car within six to eight weeks - and Tesla owners wanting to upgrade individual components can peruse Saleen's Performance Parts brochure to snag just a fraction of the FourSixteen's setup.