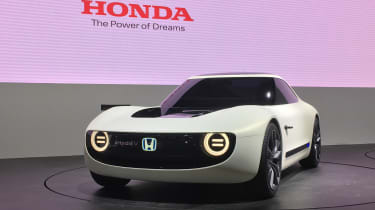 Honda has revealed its Sports EV concept at the 2017 Tokyo motor show – a follow-up to the Urban EV concept it revealed last month at the Frankfurt show.

Honda CEO Takahiro Hachigō says the concept has been ‘developed to show the joy of driving in an electric car’, and reaffirms Honda’s commitment to ‘create products which will enhance convenience for the customer.’

Built on the same platform as the Urban EV concept, it takes the form of a compact sports car, and uses many of the same retro-inspired details as its hatchback cousin. 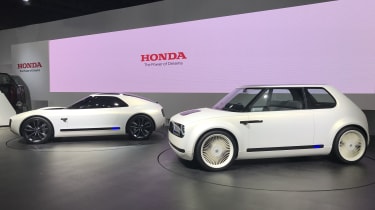 That includes the front grille element and its counterpart at the rear, with LED rings for the headlight and tail lights, and digital text behind the black panel indicating various messages – such as charging status.

Like the Urban EV conventional mirrors are also replaced by camera units, which show the rear view images on screens inside the car (though Honda hasn’t revealed an interior for the concept, unlike that of the Urban EV) and the bodywork is more flowing than that of the hatchback, with pronounced arches and a deeper cooling vent in the bonnet.

It isn’t clear whether the platform-sharing means the Sports EV would be rear-wheel drive, but electrification at least makes the packaging of such things a little easier. 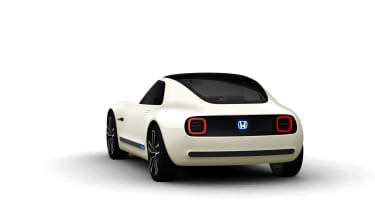 Honda does say the car features “artificial intelligence”, though doesn’t clarify beyond that – it’s likely some kind of autonomous driving would be involved, though the messages displayed in the grille suggest it might offer more unusual forms of interaction with its driver.

Unfortunately, those may be moot points, since Honda hasn’t confirmed it will build a production version of the Sports EV to join the Urban EV, which debuts in 2019. That’s a shame, as like its hatchback counterpart was at Frankfurt, it’s one of the most appealing cars on display in Tokyo.

Click here to read more about the Tokyo motor show