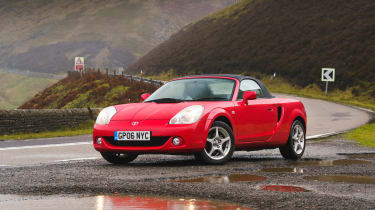 Several carmakers have taken aim at Mazda’s MX-5 in the past, but few have ever scored a direct hit. One that undoubtedly has is Toyota, with its third-generation MR2 produced between 1999 and 2007.

While the third MR2 was, like its predecessors, a mid-engined, rear-wheel-drive sports car, Toyota went back to the nameplate’s roots. Smaller, lighter and nimbler than its immediate predecessor, the MR2 also ditched coupe and T-bar-styled roofs in favour of a full roadster format – and the end result was all the better for it.

The MR2 served as Toyota’s last proper sports car until the GT86 launched five years after MR2 production ceased – and with no replacement on the horizon, it could also be the swansong for the much-respected badge. Today the MR2 represents excellent value and a genuine alternative to the MX-5.

The Toyota MR2 had originally debuted in 1984 as a compact mid-engined coupe blessed with light weight and a revvy twin-cam 1.6-litre engine. In many ways it picked up where the Fiat X1/9 had left off, democratising a drive layout that was primarily the preserve of supercars, while packing humble mechanicals that kept running costs low.

That idea persisted with the second-generation MR2, which arrived five years later – but in other ways, the recipe had changed considerably. Longer and wider than before, the new MR2 featured more exotic styling, more powerful engines and more significantly, extra weight. While the original had hovered around the metric ton, the second-gen car was 200-300kg heavier. The extra size paid dividends for comfort and refinement, but several reviewers of the time deemed the original magic in shorter supply. 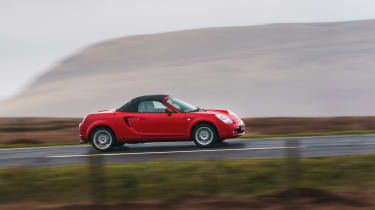 With a clean sheet of paper Toyota’s engineers set to work on the third-generation car in the mid-1990s. The MRJ concept of 1995, launched at that year’s Tokyo motor show, hinted at a very different design to the second-gen car, but the greatest clue came at the same show two years later with 1997’s MR-S concept.

The name stood for ‘Midship Runabout-Sports’, and its squared-off lines looked not unlike a tighter, tauter Porsche Boxster. Significantly smaller than the existing MR2, the car’s chief engineer, Tadashi Nakagawa, described it as breaking the ‘cycle of growth’ of the car industry – a concept that a quarter century on only rival Mazda seems to understand.

Aside from two humps in the tonneau cover behind the seats, 1997’s concept would end up describing 1999’s production car almost exactly. Now once again called MR2 (in the UK at least – Japan kept the MR-S name), the roadster weighed as little as 975kg and cribbed its engine from the seventh-generation Celica launched the same year – a car also smaller and lighter than its predecessor. 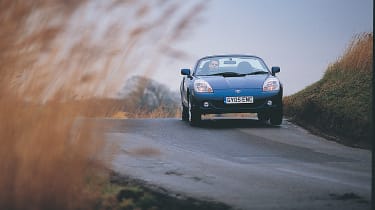 The 1.8-litre, four-cylinder unit used variable valve timing on the intake side and produced 138bhp at 6400rpm, with a useful 127lb ft of torque at 4200rpm. A five-speed manual gearbox became standard, with a five-speed single-clutch automatic debuting soon afterwards, while the manual was eventually replaced in 2002 with a six-speed manual. Suspension was relatively conventional compared to the Mazda MX-5’s exotic double-wishbone layout, with MacPherson struts at all four corners.

It used those struts well though, instantly gaining plaudits for its handling. In early evo group tests it saw off everything from the expected MX-5, MGF and Barchetta, to the Lotus Elise – finishing second only to the significantly more expensive Porsche Boxster when we lined it up against cars far above its pay grade. 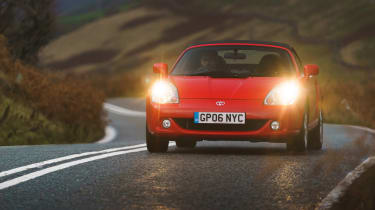 At just under £18,000 it was right in the ballpark for those more conventional rivals, and while it under-delivered on practicality (with tiny bins behind the seats and in the nose) and style (its chunky lines were more successful from some angles than others), the handling and the revvy nature of that engine were something to celebrate.

With declining sports car sales in the early 2000s, it was also a car that perhaps never quite achieved its full potential. The higher-power variant some hoped for (using an engine not unlike that used by Lotus since the Elise S2 111R) never materialised, and the car’s 2002 facelift was relatively gentle. Sales in the UK ceased in 2006, with production carrying on in Japan until 2007.

‘With some fantastic roads ahead of us, nothing’s going to get me out of the Toyota. It takes but a few minutes to know it’s a sweetly sorted car. It reacts incredibly sharply, cutting left and right with keen precision, the smallest of steering inputs bringing minute but crucial adjustments to the car’s attitude. It feels light but it’s not light on feel.

‘It has the same 1.8-litre VVTi engine as the new Celica, but it’s amazing how much sweeter the 138bhp motor feels in the MR2. With less weight to haul around, it’s zingier at the top end, lustier at low revs and keener through the meat of the mid-range.’ 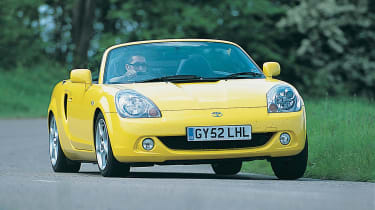 ‘What really separates the Toyota from the MG is the fine interplay between steering and throttle that determine the car’s attitude through any given bend. It adjusts with the precision of a volume knob on an expensive hi-fi amplifier. The way the MR2’s chassis effortlessly sponges away the worst ruts, dips and camber shifts is more than a match for the mostly smooth-riding Mazda.

‘The Toyota’s feisty little twin-cam wins, too. Despite having the least raw horsepower, it revs with the most freedom, top-end zing, mechanical smoothness and sporty engine note. Add a dead-comfy, low-slung driving position, proper torso-hugging seats and big, readable instruments and it looks like a bigger bargain than ever.’ 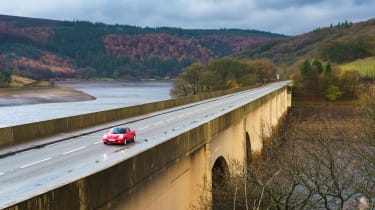 ‘Turns out the light and nimble MR2 is quite brilliant. The beautifully surfaced, shiny wet road heads into the trees and starts to roll and dip, nip and tuck. Visibility dictates a moderate pace but the chassis of the little Toyota is a joy.

‘You can feel through the steering wheel rim in fine detail when the front tyres just start to slip but you don’t back off, you simply factor it in. Occasionally the rear edges fractionally wide too, and you keep the throttle steady and work with it. Driving the MR2 calmly on the edge and comfortably on its own side of the road is very satisfying.’ 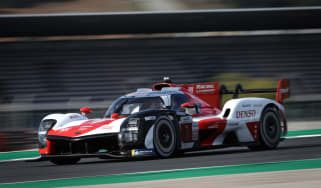 Its rarity and beauty sees this ’60s Japanese classic much sought‑after by collectors, but it turns out it’s a peach to drive, too
Toyota Corolla AE86: review, history, prices and specs

Cult cartoon star, choice of drifting legends, and a rear-driver of considerable repute in its own right. More than 35 years after its launch, can the…