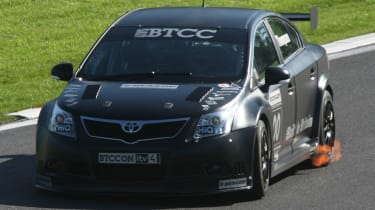 Toyota’s Avensis showcased the next generation of touring car to fans at the BTCC’s season finale at Brands Hatch on October 2010.  The Avensis has been built up to Next Generation Touring Car (NGTC) spec. The new regulations see the return of turbocharged engines to the series, and have been brought in as part of an effort to reduce competition costs and encourage teams to join the series. Although some have used the new engine in this current season (the Vauxhall Vectras of Andrew Jordan and Dave Pinkney for example) the development programme is now in full swing, with driver James Thompson charged with testing the new engine and specs.  The NGTC should effectively halve the cost of competing in the BTCC. Series director Alan Gow said - 'the feedback from current and potential teams, media and the public has been absolutely fantastic. The car has a real ‘wow-factor’ and, coupled with a huge reduction in running costs, it’s a real win-win situation. We’ve had so many positive remarks and very serious enquiries from teams who see this as their ideal opportunity to join the BTCC.' Built by GPR Motorsport, it’s an impressive makeover for the plain-Jane Toyota, with its matt black livery, flared arches and rear wing. Test driver Thompson said - 'it looks more dramatic and spectacular, just like a touring car should be!'

The NGTC Toyota Avensis didn’t seem too far off race-pace either, completing a lap of the Brands Hatch Indy Circuit just one second slower than 2010 BTCC champion Jason Plato in his Chevrolet Cruze.