The Toyota Aygo has been revealed alongside its Peugoet and Citroen counterparts at the Geneva motor show. Pictures and details here 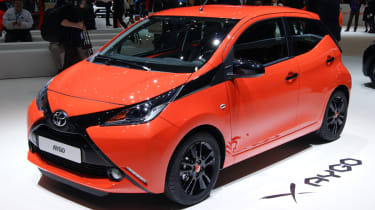 Toyota has unveiled its latest Aygo at the 2014 Geneva motor show, the city-car that shares its platform with the recently revealed Peugeot 108 and Citroen C1.

Aimed at young drivers, the curvy second-gen Aygo offers a wealth of customisation options to give target buyers a chance to personalise their car. Significant features such as the x-shaped front grille, bumper inserts and alloy wheels can be tailored to a buyer’s liking, whilst interior trim surrounds and inserts are available in a raft of colours – which can easily be changed later in the car’s life.

Even before a buyer ticks customisation boxes, it’s clear to see the latest Aygo takes a very different design path to its French counterparts. With black lines crossing the nose contrasted by angular headlights, the little city-car has a far more purposeful front-end than the softer looking 108 and C1. This form continues at the rear, where Toyota has used black to create a diffuser-like rear bumper. All of this adds together to give the Aygo a more sporty exterior, something emphasised by the almost hot looking orange car revealed in the launch pictures.

Inside Aygo drivers will be surrounded by gloss blacks and their choice of trim colours, as well as the most prominent feature – Toyota’s x-touch multimedia system. Essentially the same system found in the C1 and 108, x-touch can link up with drivers’ smart-phones and enable direct access to driver-friendly apps. It also has a five-function main menu that takes the place of buttons, meaning very few are needed across the dash. The x-touch system also links to the rear-view camera as standard, helping to vastly improve visibility when reversing.

Helping to make the little Aygo as cheap to run as possible is a comprehensively revised version of Toyota’s 1-litre VVT-i petrol engine. Having undergone development to improve efficiency, it now features a higher 11.5:1 compression ratio, a new low-friction timing chain and a lightweight cylinder-head with built-in exhaust manifold.

The revvy three-cylinder produces 68bhp at 6000rpm and 70lb ft of torque at 4300rpm, and even produces a useful 63lb ft of torque from just 2000rpm. This means drivers can spend less time working the standard five-speed gearbox in town, unless equipped with the automatic x-shift ‘box which can do the work for them in full auto-mode. Drivers with this can also manually shift via paddles.

Those looking for a little more straight-line performance will have to opt for the manual five-speed however, which reaches 62mph in 14.2secs compared to the x-shift’s sluggish 15.5. The x-shift does offer the best efficiency though, achieving as much as 68.8mpg (claimed) on the EU cycle, with emissions sitting at just 95g/km of CO2 (also to be confirmed) – ensuring it slips under the UK tax threshold.

The sporty looking new Aygo will go on sale in the UK this summer. Prices remain unconfirmed but we can expect it to sit somewhere around the £9,000 mark, slightly higher than the C1 and 108 alternatives.