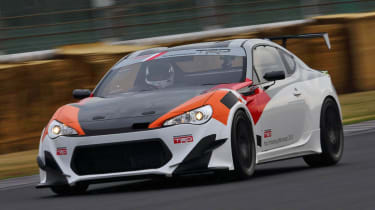 Toyota’s most extreme GT86 yet will make its UK debut at the 2013 Goodwood Festival of Speed. TRD – or Toyota Racing Developments, the Japanese company’s official tuning arm – is responsible for the curiously named Griffon Project. It first appeared at January’s Tokyo Auto Salon, promoted with claims of a faster laptime than a Ferrari 458 Italia around Japan’s Tsukuba circuit.

That claim comes despite there still being no tuning for the Toyota GT86’s 197bhp 2-litre flat-four engine. Instead, the Griffon focuses on chassis dynamics and weight saving.

The standard Torsen differential is replaced by a TRD mechanical diff, while there’s a stiffer coilover suspension setup. TRD has also upgraded the brakes, adding race-spec pads, which are clothed by 19in TWS wheels wrapped in Yokohama Advan tyres.

To cut weight, the bonnet, roof, doors, boot lid and rear wings are all constructed from carbonfibre while carbonfibre-reinforced plastic is used for the bumpers, front wings and rear diffuser. The windows switch from glass to thick plastic. The interior gets a new lick of paint, with a TRD bucket seat and a new gear knob, gauges and a Momo steering wheel.

The GT86 Griffon Project will not be a production car – its carbonfibre makeup would price it way beyond the regular Toyota’s £24,995 price point – though it’s a bold advert for TRD’s official tuning for the coupe, which can be purchased altogether in the £31,495 GT86 TRD edition.