With Sachs dampers, Brembo brakes and grippy Michelin tyres, the TRD Special Edition is the GT86 you’ll want, but there is a downside. 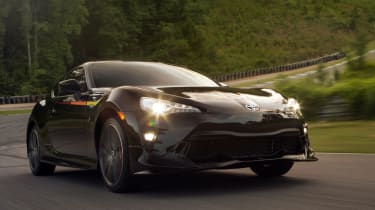 Since the Toyota GT86  was launched in 2012, enthusiasts have been crying out for a more focussed, more aggressive and, dare we say it, a faster, more powerful version. The new GT86 TRD Special Edition answers some, if not all, of those demands, thanks to new dampers, grippier tyres, more serious brakes, a performance exhaust and a distinctive bodykit. It’s not all great news, though; power has not increased, the model is limited to just 1418 units and Toyota currently plans to sell the TRD Special Edition in America only.

The TRD (Toyota Racing Developments) upgrades for the new limited edition GT86 include the same Sachs dampers and larger Brembo brakes found on the UK’s Club Series Blue Edition GT86 models. The brake discs are not only bigger (325mm fronts and 314mm rears compared to 294mm fronts and 290mm rears of the standard car), but the single piston calipers have been replaced by four-piston front and two-piston rear units.

To accommodate the bigger brakes, the TRD car has 18-inch diameter wheels wrapped in 215/40 18 Michelin Pilot Sport 4 tyres rather than the low friction rubber of the basic car. Of all the TRD upgrades, it’s the Michelins that are most promising – whenever we’ve tried Toyota’s 2+2 sports car on high-performance tyres it has made it possible to enjoy the balance and poise that has been engineered into the car’s chassis. The efficiency-oriented Michelin Primacy tyres the GT86 comes on as standard, even the Blue Edition model, don’t provide the security or progression to allow you to appreciate the car to the same degree.

The TRD may come with a new exhaust, but it hasn’t helped the engine produce any more power or torque. The 2-litre flat-four engine in this special edition puts out 205bhp and 156lb ft of torque when specced with the six-speed manual gearbox, or 200bhp and 151lb ft if you chose the six-speed automatic transmission. The more perceptive of you will notice that’s a few bhp more than the European models that make 197bhp, but the TRD Special Edition is the same as other US GT86s.

As it’s only available in black, the visual changes that come on the new TRD model are reasonably subtle. As well as the bigger wheels, there’s a slightly more prominent splitter, some wider side sills, a bigger rear diffuser and a neat little spoiler on the boot. Even the red, orange and yellow decal down the side is tasteful and restrained. 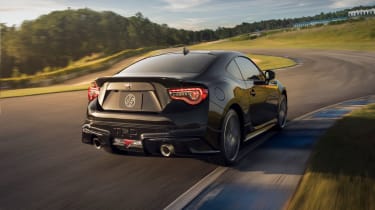 Although the pre-facelifted version of the GT86 came with a selection of Toyota Racing Developments upgrades in the UK, most notably bigger wheel and Michelin Pilot Sport 3 tyres, we aren’t likely to see the TRD badge on European cars in the foreseeable future. Instead, more performance oriented Toyotas will carry the Gazoo brand; either GR (Gazoo Racing) for the mildly upgraded models and GRMN (Gazoo Racing Meisters of the Nurburgring) for the most extreme versions. Toyota has already shown us how serious its GRMN models will be with the recent Yaris GRMN.

Should the entire set of upgrades on the American-only GT86 TRD Special Edition come to Europe at some point, expect it to carry the GR badge. However, as Toyota gears up to launch its new sports car, the Supra, don’t expect any big changes to the GT86 for a little while.