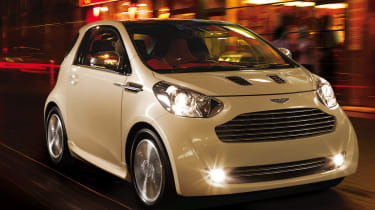 Aston Martin has confirmed the Toyota iQ-based Cygnet city car will go into production in March 2011 at the company’s Gaydon factory. Initially shown as a concept earlier this year, the Cygnet is described by its manufacturer as an ‘Aston Martin tailor fit for the city’. More importantly, the car will play a key role in lowering the average CO2 emissions of Aston’s range, while the company promises it will not compromise on quality with the smaller car.

Aston Martin’s CEO Ulrich Bez said - 'The Cygnet is designed to support our sports cars by providing a greater degree of freedom in the urban context; it is a very special car, a premium but compact package with heart, soul and personality.' Despite its humble beginnings, each Cygnet will go through the same hand-built process as its bigger brothers, with a bespoke interior replacing the Toyota trim. The car will likely head from Toyota's Japanese factory to Gaydon part-built, with the unique bonnet, wings and DB9-like rear lights fitted by Aston's technicians.

The mechanicals are likely to remain largely unchanged from the original Toyota, with the more potent 97bhp four-cylinder 1.33-litre petrol engine under the bonnet.

Further details on the Cygnet’s price and specification are due for later this year, although prices are expected to start around the £30,000 mark - three times the cost of an equivalent Toyota iQ.