Bespoke supermini isn’t cheap (and is sold out), but it delivers raw and undiluted thrills that are missing from many in the class. 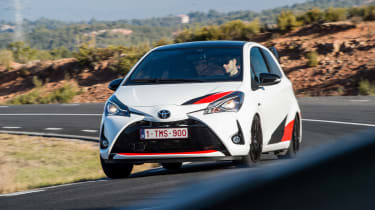 humb the starter button and the 2ZR fires keenly, idling with a note that’s more vocal than the Peugeot 208 GTi’s but a fair bit quieter than an earlier prototype we drove.

It’s a joy to work the GRMN’s engine hard. It’s not just a means of getting along the straight sections of a road quickly, but rather something that’s a source of satisfaction itself just to deploy. Clearly, it lacks the low-down punch of some, but the mid-range is surprisingly effective and most of all, it loves to be extended between 5000-7000rpm..

While there is the distant characteristic whine of a supercharger at lower revs, it’s the rush of compressed air and exhaust blare that you hear towards the red line. Crispness of response is its major advantage, complemented by a slick and precise gearchange.

The car’s outright performance figures are competitive rather than startling, with the 0-62mph dash taking a claimed 6.3 seconds – although the fact the sprint geared Yaris won’t crack 60mph in second, requiring a change to third, means this is a pretty impressive effort. Top speed is electronically pegged at 143mph.