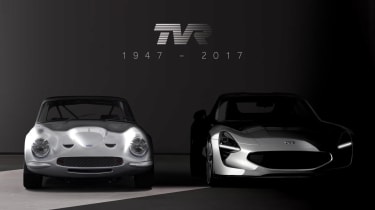 The impending return of TVR to the sports car fold has caused quite a stir in the last few weeks – so much so that the company has decided to allow interested parties to put deposits down for its first car.

The former is to provide a naturally-aspirated, dry-sumped V8 for the new generation of sports cars, while Gordon Murray’s input comes in the form of his iStream technology – jointly, a technology that defines the car’s construction, and the process in which it is built.

The first cars should appear in 2017, but the huge response to TVR’s return has prompted the company to start taking desposits from July 7. John Chasey, TVR’s Operations Director, says ‘Our phone lines and online enquiry system went into meltdown when the news was announced, and we decided that we must begin to bring a structure to the enquiries and build a delivery pipeline well in advance of production.’

Chasey adds that year one production volumes will be low as the company finds its feet and ramps up production, so allowing customers to place deposits now rewards those making a financial commitment at such an early stage.

Potential customers can put down £5000, though members of the TVR Car Club (who’ve been so for more than six months) can place down half that in July, a celebration of the Club’s 50th year and the members’ loyalty to the brand. TVR will also make a financial donation to the club itself for each deposit taken from a member. TVR’s new chairman, Les Edgar, praises the club and its ‘enthusiastic ambassadors’ of the TVR brand.

While the first cars are still a few years away, TVR is now concentrating on establishing its UK network of TVR Heritage and TVR Performance partners, many of whom have previously been TVR main dealers.