Excited for the return of TVR? This vibrant Griffith could satiate you in the meantime 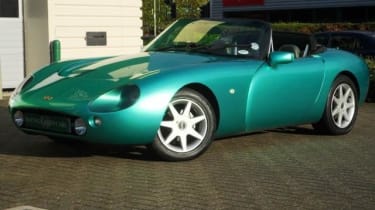 It’s a risky move for a company yet to unveil its first new vehicle, but £5000 can currently get you a spot on the waiting list for the all-new TVR sports car due in 2017.

An equally risky move might be to spend another £12,995 on top of that TVR deposit to get yourself an actual TVR from the good old days under Peter Wheeler’s ownership.

Specifically, a 1993 example of the highly desirable Griffith 500 – an archetype of the TVR formula of light weight, high power, and a distinct lack of any device that might prevent you planting it through a wall, hedge or other inanimate but disappointingly unyielding piece of street furniture.

A little background. The TVR Griffith is one of the marque’s most recognisable models and one of its longest-running, having been produced from 1991 until 2002.

Originally, Griffiths used the ubiquitous 4-litre Rover V8 in a 240bhp state of tune, though a 280bhp, 4.3-litre version of the engine was optionally available. Both were more than enough to trouble the rear tyres of a car weighing just 1060kg, or only 45 kg more than the latest 158bhp, 2-litre Mazda MX-5. Later, the engine would be developed further to five litres and 341bhp – the Griffith 500.

The resulting thunder accompanied a 4.8-second 0-60mph thrill-ride and 167mph top speed in evo’s hands – not at all shabby from a car that cost under £35,000 back in the late 1990s. A Porsche 996 was £30,000 more, albeit marginally less likely to leave you stranded on the side of the M1 next to a steaming, albeit pretty lump of fibreglass. 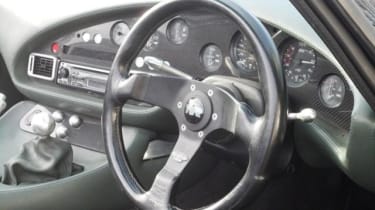 The appealing styling would remain largely the same throughout production though, which means the Griff is equally attractive whatever age of vehicle you’re looking at.

This example at Racing Green Cars in Surrey, via Classic and Performance Car, illustrates this nicely. TVR hadn’t yet discovered the magic of colour-flip paint in 1993 but bright colours were still on the agenda, and this ‘Ocean Haze’ with ‘fern’ trim combination is enough to scoop your eyeballs from their sockets.

It’s apparently one of the first 500s to have hit the road, has covered 77,000 miles, and comes with a long list of new and replaced parts that implies the previous owner looked after it properly. A recent camshaft, followers, vernier gear and timing chain further reassures.

Will your £5000 deposit put you in line for a more appealing package? We’ll have to wait and see, but the wealth of used TVRs whose foibles have been massaged away over the last few decades gives you plenty of choice in the meantime.

> Find TVRs for sale on Classic and Performance Car