Vauxhall takes on Mini and Abarth with some success, but pricing puts it up against the big guns 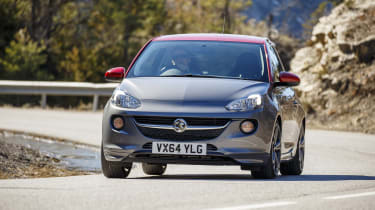 The Adam S is Vauxhall’s attempt at giving the previously under-nourished Adam a bit of pep.

Gloss over the name – which started off as Adam S, was briefly changed to Adam Grand Slam (really) and subsequently changed back to Adam S – and you have a car aimed at Fiat’s Abarth 500 and the non-S Mini Cooper.

While this doesn’t quite raise the Adam to the level of full-fat hot hatches (and doesn’t tread on the toes of the recently-announced Corsa VXR) it’s significantly more than any Adam previously available – power is up 50 per cent and torque by 70 per cent compared to the regular 1.4.

A six-speed manual gearbox snagged from the 1.0-litre Adam replaces the regular five-speed, though like its rivals there’s no limited-slip differential available.

The Adam S benefits from uprated springs and dampers and a revised ‘compound crank’ rear axle – a torsion beam, by any other name. Brakes from the previous-generation Corsa VXR – with 308mm discs up front and 264mm rotors at the rear – bring proceedings to a halt.

Vauxhall also lets drivers deactivate the electronic stability control system at the touch of a button – though 225-section tyres on 18-inch wheels suggest a car that prioritises grip over adjustability.

The interior is a nice enough place in which to reside, though we’re not so sure about some of the red graphics echoing the ‘red and roll’ exterior paint scheme – the red stickers on the door cards and dashboard trim seem a little like afterthoughts. The exterior works fairly well though, with a squat stance and just enough visual addenda to justify the sporty billing. 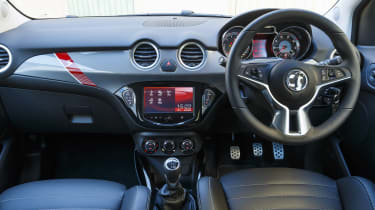 We’ll have to reserve full judgement for a drive on UK roads, as a short, smooth section of the Route Napoleon is a fairly one-dimensional environment over which to test a vehicle.

The Adam exhibits plenty of grip around the flowing alpine curves, even on the slightly damp roads we encountered during the tests. Despite the open diff the Adam doesn’t devolve into rampant wheelspin, even out of tight hairpins with stability and traction control disengaged.

There’s not much steering feel through the oddly large rim, but it’s quick and accurate without resorting to Mini-like hyperactivity about the straight-ahead. There’s some extra weight over the standard Adam’s steering, though this feels more like a symptom of the wide tyres than engineered-in sportiness.

Vauxhall’s claims that the engine has been tuned for mid-range response rather than top-end grunt rings true on the road, with just enough urge to entertain and a pleasing exhaust note for accompaniment. A light gearshift allows access the mid-range grunt, though the action does feel a little rubbery through the gate.

The whole experience is fun insofar as driving any small, nimble, relatively punchy hatchback is fun, but fails to be truly memorable.

Mini’s Cooper is still the car to beat in this segment. On the road the Cooper is as effervescent as ever and the new three-cylinder 1.5 is punchy and smooth, while the chassis feels more engaging than that of the Vauxhall. It’s not quite as powerful as the Adam, but counters with a six-tenth quicker 0-62mph time and significantly better economy.

The Abarth 500 is quicker by the same margin but loses out to the Adam on economy – 43.5mpg plays the Vauxhall’s 47.8mpg (the Mini boasts an official mpg figure in the 60s).

What both Mini and Abarth have that the Adam doesn’t is a direct line of heritage. Vauxhall touted the Grand Slam as a spiritual descendent of the classic Viva GT on our alpine drive, but few buyers will make the connection. It's a factor of limited importance to the general car-buying populace, but potentially limits the car's appeal for enthusiasts swayed by historic names like Cooper and Abarth. 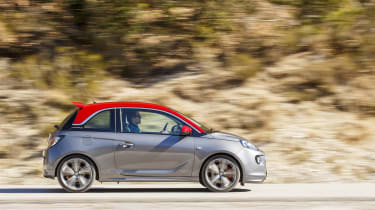 By the time you’ve thrown in the Adam’s desirable Recaro seats - £1040 with fabric faces and £1610 with leather – you’re well into the realms of 200-horse performance hatchbacks and the case for the Adam weakens further.

There's lots to commend Vauxhall's latest tearaway hatch, with appealing styling, a grippy chassis and a strong engine. But priced as it is, it sits in an awkward limbo between more appealing rivals and proper hot hatchbacks from the class above – with a fun factor that doesn't quite match either.