Vauxhall has revealed images of its new full-sized convertible, as well as details on its new 1.6-litre turbo petrol engine. 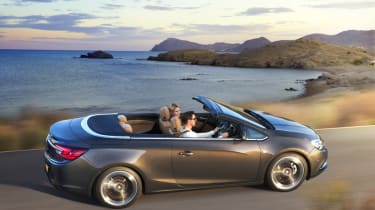 Vauxhall has revealed images of its new convertible model, the Cascada, after releasing teaser images before the Paris motor show. Larger than an Astra and smaller than the Insignia, the new model is set to be the cheapest full-sized convertible on the market, but Vauxhall insists it will 'offer customers high levels of equipment, technology and luxury'.

Moving away from the folding metal hard-top of the previous Astra TwinTop, the Cascada uses a traditional fabric hood, which can be retracted in just 17 seconds, at speeds of up to 30mph.

It also sees the introduction of Vauxhall’s next-generation of turbo petrol engine range, starting with the 168bhp 1.6-litre SIDI Turbo ECOTEC engine. The new MGE family of engines is said to bring huge improvements in power and torque delivery, as well as better overall efficiency.

The entry-level starts with the 138bhp 1.4-litre turbocharged engine, with the 164bhp 2.0CDTI diesel engine also available. Vauxhall has also confirmed more powerful petrol and diesel engines are on the way, hinting at the BiTurbo diesel engine, with possibility of tuning the 1.6 MGE engine even further.

Underpinning the front of the Cascada is a variation of Vauxhall’s HiPerStrut front suspension, which is currently used on the Astra and Insignia VXR models. This will be standard across the entire range, with the company’s fully adaptive FlexRide system offered as an option.

UK deliveries start in March 2013, with prices to be announced when order books open at the beginning of the year.