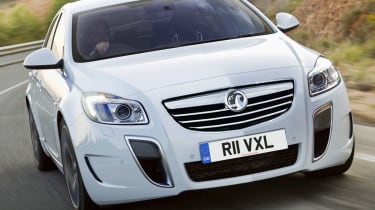 Vauxhall’s VXR range has swelled with the addition of a heated-up Insignia. It’s set to directly replace the Vectra VXR – a very likeable sports saloon – and comes with a potent 2.8-litre V6 engine.

Thanks to a twin-scroll turbocharger it produces 321bhp and is good for 0-60mph in 5.8sec, with a limited 155mph top speed. It’s a 45bhp improvement over its Vectra predecessor, although that car enjoyed an unlimited top speed of 161mph. Without electronic interference the Insignia would no doubt top that.

Rather than being a warmed over repmobile, the VXR gets a bespoke four-wheel-drive chassis, which like most performance cars these days, comes ‘Nurburgring-proven’. It rides 10mm lower than an Insignia SRi and boasts an electronic limited-slip diff and High Performance Strut (or ‘HiPerStrut’) front suspension. The latter is unique to the car and has two purposes – cutting torque steer, and maintaining negative camber during cornering to boost grip levels.

There’s also revised dampers as well as Brembo brakes with vented and cross-drilled discs. They come wrapped in 19in alloys, with 20in lightweight forged wheels on the options list. Styling tweaks are broadly quite subtle, with new bumpers, twin mesh grilles and a rear spoiler joined by the usual VXR colour choices.

However, the aim was not to make the Insignia a ballsy, OTT VXR in the vein of its VXR8 big brother. ‘The Insignia VXR is not just about absolute power, but a combination of usable performance and chassis sophistication which is the match of premium rivals, such as Audi’s new S4,’ says Andy Gilson, Vauxhall’s Marketing Director.

There’ll be a five-door hatch and estate and a four-door saloon, with prices set to kick off around £27K – a rise of ten per cent over the outgoing Vectra VXR, but £8K less than its S4 rival. You can read about evo's long term Vauxhall Vextra VXR here.