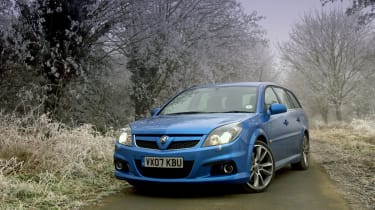 It is very difficult to guess or forward-plan what long-termer you might have next. It’s a bit like winning a prize in a charity raffle – you know you should be grateful no matter what it is, but secretly you hope it’s the hamper from Fortnum & Mason and not a bottle of Blue Nun.

Given how sporadically they can arrive, sometimes several new long-termers appear in the evo car park at the same time. The good thing about this is that, whilst some are being fought over like the last bottle of Scotch, a gem can be overlooked. The Vectra VXR was one such car.

Back in June last year, the only VXR Vectra we had tried was the saloon. It had done well in a group test (evo 090) and surprised a few people, but the estate version had dipped under most of our radars, probably because none of us had ever seen one on the road.

I must admit that, at first, like the others in the office, I was a bit dubious about running the Vectra. Without wishing to sound too snobbish, I’d fallen into the trap of thinking it was just there for the grown-up Nova boy who now had some kids. A big, clumsy car with a rude-boy body kit and a Griffin on the front. Very quickly, though, I started to appreciate just how good it really was.

Being a snapper, I need a car with enough space to lug my camera gear around, but it also has to be one that’s quick enough to keep in touch with the fastest cars we might test, and comfortable and reliable enough not to be a pain however huge the mileages that will pass under its wheels each month.

There’s certainly no shortage of load-carrying space in a Vectra estate. It’s a massive car. Next to a Transit van it only has to concede in height. Passenger space is equally huge. Being 6ft 2in tall, any passenger who sits behind me when I drive usually has to concertina up, but it wasn’t so in the VXR. Without even adjusting my seat the exceptionally tall and lanky Catchpole could sit and read The Times in comfort. And there was still a very big boot behind him.

During our nine months together the Vectra transported camera gear, ladders, packing boxes, planks of wood, barbecues – and all the tyres for our big tyre test last year. With the rear seats laid flat, there was nothing you can buy from IKEA that wouldn’t fit in there. I reckon a small Scottish island would probably have fitted, at a push. No wonder that, with VX07 not being equipped with parking sensors, parking it felt akin to docking the QE2.

Even with a full load the VXR’s performance never faltered, and its 276bhp turbocharged V6 engine meant it had no problem keeping up with ‘fast’ cars. In fact the Vectra put its power down in such an eerily smooth fashion, disguising its speed so well, that you could easily find yourself cruising on the wrong side of the law if you weren’t careful. Apparently it’s easy to get even more from that engine, too. One reputable tuner reckons it can get another 60bhp with nothing more than a simple remap…

Like most other VXRs, the Vectra had a Sport button. It stiffened the dampers and sharpened the throttle sensitivity. The change in damping was fine – stiffer, but not so stiff that your fillings fell out. The throttle, however, was just too hair trigger-like. Quite a few times I forgot to disengage Sport mode upon entering a town only to later find myself propelling the VXR towards the rear of the car in front like Bruce Lee about to deliver a two-inch punch. Hiking boots and Sport mode were a definite no-no.

Halfway through its time with us I had to replace the Vectra’s tyres. The Dunlop Sport Maxxes I chose came at a price – over £215 per corner – but they did cut road- noise considerably over the original Continentals and gave the front end noticeably better grip.

Due to the number of miles we racked up together, the Vectra had two services while it was with us – one every 14,000 miles. The only other costs endured were for a broken foglight and lots of fuel. Frugal the VXR was not. Trying to hit the dizzy heights of 25mpg was near impossible, especially if you have a right foot as heavy as mine…

The Vectra VXR could almost be seen as a Q-car, not too unlike the new RS6 and M5 estates are – inconspicuous, spacious and very fast. OK, perhaps it’s not quite as fast as the other two (although it can hit 160mph where the other two are limited to 155) and the interior may not be up to their luxurious standards (the VXR’s gearknob is like a serrated Rubik’s Cube and the Recaro seats were so bad for my back that my chiropractor begged me never to sit in them again), but then with a basic price of £26,420 it is almost a third of the price (though the initially steep depreciation is still a little chastening).

Depreciation apart, the only downside to having owned the Vectra has been the constant chore of having to tell the badge snobs just how good it is. Well, that and having to give the keys back.