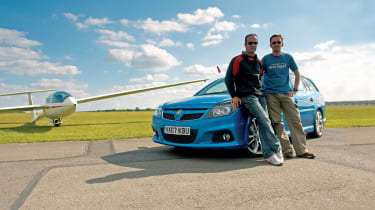 I’ve affectionately named our latest fleet member ‘Grifter’ because, for a number of reasons I shall get to shortly, it reminds me of a pushbike from my childhood. For those that don’t remember the ’80’s, the Raleigh Grifter was the bike that most kids wanted. It looked like a motocross bike, felt as heavy as a motocross bike, had three gears that were changed by twisting a handle grip and was great for doing wheelies. I had one. It was blue. I liked it very much.

When our new Vectra VXR arrived I had just finished a year in the Focus ST and needed a car, so the keys came my way. I can’t say I felt like a kid on Christmas morning all over again. Not being a family man with babies, buggies and the school run in mind, I never really saw myself as an estate car type. But there are compensations…

Getting in for the first time, I was immediately struck by just how long the VXR estate is. Looking in the rear-view mirror, the tailgate seems miles away. The load area is huge, and even with my 6ft 2in frame in the driving seat there is ample legroom behind.

The second thing that hit me was just how quick it is. The 276bhp twin-scroll-turbo 2.8-litre V6 pulls the car from standstill to 60mph in 6.3 seconds – not too shabby for such a big car – and takes it on to a top speed just shy of 160mph.

Inside, the only extras are a CD/satnav system (£1250), climate control (£275) and a Bluetooth mobile phone connection (£300). Standard equipment is pretty generous, including a pair of Recaro seats up front – and here’s where the similarities with my Raleigh Grifter begin. One of my strongest memories of that bicycle is just how big the saddle was. It was huge. Unless you had a bottom the size of Bella Emberg’s it was never going to be comfortable, and the VXR’s Recaros are equally uncomfortable. They can be adjusted several ways, but even after trying every possible combo I still can’t get comfortable. There’s a bar across the middle of the base that numbs your bum, and on long journeys I end up with aching legs. I thought it was just me having been spoiled by the Focus’s great seats (also Recaros, ironically) but several of my colleagues have commented on the same problem. For the time being I’ve adopted a slouching position that seems to help, but god only knows what it’s doing to my back.

The Raleigh Grifter had an extra bar running across its handlebars that was covered in foam wrapped in perforated plastic, and again the grips of the Vectra’s steering wheel are uncannily similar. While you can’t change gear from the Vauxhall’s steering wheel like you could with the Raleigh’s right-hand grip, it feels like you can do just about everything else without moving your hands. All of the on-board computer’s functions, audio, satnav, trip computer and phone are but a few thumb movements away.

A favourite trick with the Raleigh Grifter was to bend its plastic mudflaps back on themselves so that the knobbly tyres would rub against them, creating a noise like a raspy motorbike. Fortunately there is no need to do that with the VXR as the two trapezoidal tailpipes let out a sweet-sounding V6 rasp all of their own. They look the part too, and accompanied by the usual sportier VXR trimmings and our car’s optional 19in alloys (£600) and ‘Arden Blue’ pearlescent paint (£350) give the exterior a real lift.

Having just stepped out of the very orange Focus the colour seemed quite mild-mannered at first, but looking at the lines of dull hues in the many motorway queues that I seem to be finding myself in at the moment, it’s beginning to grow on me, especially as it helps Grifter stand out from all the ‘ordinary’ Vectras on the road. There’s plenty of them out there – and I’ve yet to see another VXR amongst them. That’s a shame, because at its price (£25,775 basic for the estate, £24,675 for the hatchback) and with it’s level of performance, it seems like a good deal to me.

But maybe it’s popularity will grow. The VXR treatment has made the Astra a credible hot hatch option and, thanks in no little part to VXRacing’s efforts in the BTCC, it seems entirely possible that the same could happen with the Vectra.

With Tom Chilton’s youth appeal and Fabrizio Giovanardi’s expertise, Vauxhall’s Touring Car team has all the bases covered, and at the time of writing Giovanardi is in with a strong chance of taking the drivers’ title. He’s no stranger to winning Touring Car championships, of course; the 40-year-old has won seven in his career: three Italian, one Spanish and three European.

When he’s not racing, one of his favourite pastimes is gliding, and when an invitation arrived to join him enjoying his hobby, I used my position as a fellow Vectra driver to make sure I was the one who got the job.

Fabrizio’s 2006 Vauxhall drive came about when he had just finished his WTCC contract with Alfa Romeo and Vauxhall had just lost Yvan Muller in BTCC. Fabrizio had tried to get into British Touring Cars ten years earlier, but as a driver from abroad he had few sponsors and the competition for places was high.

When we meet, he tells me that his first season was a steep learning curve. Getting familiar with the British circuits and having to deal with an altogether more aggressive style of racing didn’t come easy. But he adds that this year he feels more at home and he’s more determined than ever to win the championship.

‘For me it’s not necessary to have the best team package straight away,’ he says. ‘It’s about learning, improving and pushing. I like it when it is difficult, I don’t like it when it’s a pushover.’

I ask if he thinks there’s a future for BTCC and he is quick to point out that it is still regarded as one of the most ferocious racing tournaments in Europe. However, he agrees that care is needed to ensure that it doesn’t die out, and the only way to do that is to make it more attractive to manufacturers (at the moment more than half the teams are privateers).

Giovanardi’s manner is very calm and his responses very calculated. ‘I never get stressed before a race weekend, or after,’ he tells me. ‘The racing is a profession. So at the weekend I am 100 per cent committed, but by Monday it’s forgotten. It’s a job… a very good job.’

He tells me that he spends all week in Italy either helping out in his wife’s gallery or finishing off building his house. He tries to go gliding as often as possible and enjoys flying over the mountains near his home in Modena.

When I ask how he drives when he’s not on track, he has a surprising anwser: ‘I am a really bad driver on the road. I prefer someone to drive me around. My attention on the road is not so high. I get too frustrated that it is too busy. That is why I fly.’I’d always thought that gliding looked like such a relaxing form of air travel, just catching thermals to gain height then floating down to a nice leisurely landing, but before we take to the air Fabrizio puts me straight.

‘Gliding is a massive challenge,’ he says. ‘You have to know what the weather is doing, where the thermals are, how to get distance. It’s very technical. For me racing is about pushing to the limit and trying to go beyond. If I go off at a circuit there are barriers to stop me, but there aren’t when I’m in the air.’

When he tells me that he’s scared every time he flies because he doesn’t ‘want to go over the limits without recognising it,’ I’m already reaching for the rip cord, but as Pete Masson – the 2001 Club Class world gliding champion – straps me in, he tells me that he’s already been up with Fabrizio and that I’m in good hands.

He’s right: once we’re in the air Giovanardi is at ease with the glider. I can see why he enjoys it so much. It’s an amazing feeling flying free without the aid of an engine and only using the most basic of apparatus. We’re up for 20 minutes or so, catching several thermals before Fabrizio does a landing that would put many professional pilots to shame.

After thanking him several times too many and asking Pete just how much it would cost for me to have my own glider (it’s a lot cheaper than you might think), I say my goodbyes, jump into Grifter and join the evening’s first traffic jam, wishing I could fly home.