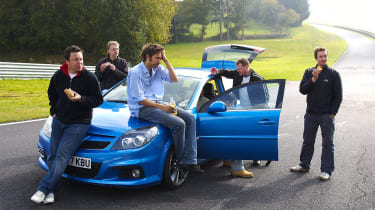 eCoty is usually a good excuse for me to get to drive some of the year’s best cars. But this year things were different. With time tight and a lot of photography to be done, I spent the entire week in the Vectra.

It all started with a long and dull drive down to Clermont Ferrand in central France, with my brother following in the Cooper S Works. I wasn’t expecting the Vectra’s satnav to have our hotel in its memory banks and I was right. In fact the closest place I could find on it was nearly 30 miles away. The VXR and I fell out…

After getting quite lost and arriving very late, it was an early start the next morning to recce the area in preparation for the arrival of the rest of the team. It would probably have been more sensible for us to have taken the nippy little Mini, but instead we opted for the Vauxhall.

Up and down more mountain passes than Hannibal’s elephants we went, but VX07 was always great fun, comfortable too. By the time we’d found the ideal roads and returned to the hotel (using a map) to await the others, the VXR and I were friends again.

The next day it was straight into the shoot. Leading the 12 eCoty contenders to our chosen location was quite daunting, but at no point did the VXR seem to be holding anyone up. In fact the amazing thing about it is that, even when loaded-up with all my camera gear, stepladders, cleaning equipment and rubbish left behind from on-the-go lunches, it still has amazing performance. This was particularly apparent on the second evening when we chased a flying Catchpole back to the hotel. Henry, in the Ferrari no less, charged off down the road, accelerating away as if the setting sun had just scolded his bumper. For no other reason than competitiveness, I decided to chase him, knowing all too well I shouldn’t stand a chance. For the next half an hour the Vectra and I hunted down Henry and the Ferrari, never losing sight of them. The VXR’s turbocharged V6 would pick up speed in an instant, and even with all the gear in the back there was no apparent fading of the brakes or the expected understeering frenzy.

OK, perhaps Henry would say that he wasn’t trying too hard, but the Vauxhall was still absolutely phenomenal nonetheless. It made me wonder why there aren’t many people driving around in one. After all, it’s fast, it’s fun and it’s hugely practical.

Not once during the week did I feel short-changed to be driving the VXR, and over the 2500 miles we covered, it was faultless (well, apart from the nav). Unfortunately the tyres were pretty much finished off by the pounding they took on the mountain roads. Then on the way home my brother, who had managed to wrestle the keys out of my hands, managed to catch a rock thrown up by a lorry with the Vectra’s windscreen.

Both are due to be sorted in the next couple of days, then we’ll be off to another airport. No rest for the wicked…