This is it: the 2014 eCoty video. Which of our 10 contenders will take the crown? All is revealed... 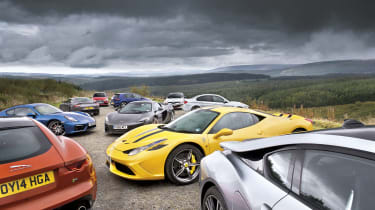 It's finally here, the coveted evo Car of the Year video for 2014.

Before you watch it however, you may want to meet the contenders:

If you haven't already read the evo Car of the Year magazine issue, in association with Michelin, you won't know how much of a cracker eCoty 2014 was. It certainly threw up a few surprises...

Every single member of the judging panel agreed that several cars failed to live up to their expectations, whilst others far surpassed them. Rather than being another predictable 'oh look a 911's won' test, eCoty 2014 - which didn't even feature a 911 - proved that on the same day, in the same place, cars that once looked like champions can feel remarkably average, and of course, vice versa.

So who were those surprised judges? Let me introduce you to them:

With thousands of high performance miles, several international race wins and a hairdryer between them, the all-star team whittled down the 10 contenders to choose an eventual winner. Don't worry, we won't be giving the results away here, you'll have to read the magazine for that. But what we can do is introduce you to the cars.

In no particular order...

We love a good hot hatch, and this one is really, really good. The Golf range-topper has already toppled the once four-wheel drive king - Subaru's Impreza - can it take on the rest? The ingredients are certainly there...

We mustn't forget this is McLaren's first real hack at making its own supercar. Yes the F1 wore a McLaren badge, but it was a special, very focused project. The 12C evolved 650S on the other hand, is a solid, comparably mass-produced supercar. Can it really fight it out with the more experienced marques?

The standard 458 isn't exactly lacking, but the Speciale still brought the game forward by a whole chunk. Rapid, pointy, and yet still very approachable, can you ever really discount the Prancing Horse these days?

The most efficient M3 ever built takes the blank sheet of paper approach. It's all new, and as a result has massive potential to significantly build on its predecessor's success. Another legend in the making?

Ok, so there isn't a 911, but there's still a Porsche in eCoty 2014. The Cayman GTS sharpens up the already agile Cayman. And since eCoty is based on driving thrills, Porsche surely stands one of the best chances?

Oh how happy we are this car exists. It's big, it's brutish and best of all, it's naughty. It's quick too, and with the hard top has become a much more serious steer. Whilst it might not be the sharpest weapon, can that character win the judges over?

Welcome to the future. Except it's very much the present. BMW has demonstrated that is has no intention to follow the crowd with its i8, and the entire motoring world has been astounded at how the i8 hits the ground running both as a technological marvel, and truly impressive sports car.

The Trophy-R is to the Megane what the Speciale is to the 458. Stripped out, raw, loud and well, it has bucket seats and no radio, it's a serious contender despite being front-driven. It lacks the refinement of many of its rivals as a result, but when it comes to driving engagement, the potential is high...

The Vanquish brings with it the most cylinders - 12 in total - and one of the prettiest exteriors. It's big and luxurious but still fast and agile. It's perfect for fast paced long-distance cruising and not afraid to attack an apex or two. A great all-rounder, but can it be an overall champion?

It may be tiny next to to the others, but it's no less angry. A boosted engine and quattro all-wheel drive make for surprisingly brisk acceleration no matter the surface, and with such a short wheel base it's surely amongst the most chuck-able here? eCoty likes chuck-ables...

So now you've met the contenders, who do you think will win? If you've read eCoty please do your best to avoid spilling the beans below. The answers can be found in evo Car of the Year.