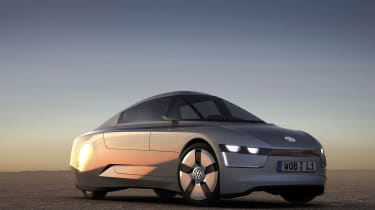 Volkswagen has unveiled this mad concept, the L1, at the Frankfurt motor show, with some genuinely impressive headline figures for economy and a KTM X-Bow style monocoque chassis.

So it won’t set any pulses racing with its 99mph top speed and a 0-60mph crawl of 14.2sec, but a clever two-cylinder, 800cc, diesel-electric hybrid engine bolted to a 380kg carbon fibre and aluminium body means the L1 is capable of a whopping 189mpg on the combined cycle while emitting just 39g CO2/km.

A 10-litre fuel tank then means the L1 can manage over 400 miles between stops.

As far as dimensions go, this strange-looking two-seater is 3.8m long, the same as a Volkswagen Fox, but just 1.1m tall – Lamborghini Murcielago height.  At 1.2m wide, it’s also thinner than any car on sale today.

The common rail, direct injection TDI engine develops 27bhp at 4000rpm in ‘ECO’ mode, rising to a heady 29bhp when you press the Sport button, and putting out 74lb ft of torque from 1900rpm.  To help the performance along, this is combined with a 14bhp electric motor which only engages when accelerating, delivering 40 per cent extra torque.

This isn’t a first for Volkswagen, as a 1-litre concept was unveiled by the Wolfsburg manufacturer back in 2002, although putting the carbon fibre body into large-scale production at the time wasn’t possible so the project was shelved.  This super-economical L1, however, is a very real possibility, with sales projected within three to four years.