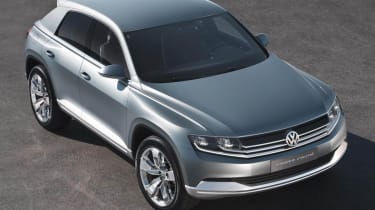 Volkswagen could take on the Range Rover Evoque and Audi Q3 with its Cross Coupe, revealed in concept form at the Tokyo motor show. The show car features a plug-in hybrid powertrain that combines a 148bhp 1.4-litre 1TSI petrol engine with two electric motors, one at the front axle and one rear, developing 54bhp and 114bhp respectively. When used in combination, there’s a total output of 261bhp on offer, which allows the car to accelerate 0-62mph in a respectable 7.0sec and reach a top speed of 125mph. Despite the Cross Coupe’s decent performance, it emits 62g/km of CO2 and boasts a claimed 105mpg figure. A production model would likely possess VW’s array of more conventional TSI and TDI engines mated to manual and DSG gearboxes. Inside, the four-seat cabin – unlike the powertrain – has been kept relatively simple and includes leather seats, black trim and aluminium accents. Because of the car’s dramatically sloping roofline, the boot has a capacity of 379 litres, but this can be increased to 1229 litres with the rear seats folded down. Size-wise, it sits between the Golf hatchback and Tiguan SUV, and its polished, production-ready styling hints at a rival to Range Rover’s hugely popular Evoque. VW says the Cross Coupe has a broader role than that, though, previewing the look of VW’s future SUV range, the next Tiguan being the next model due, in 2014.