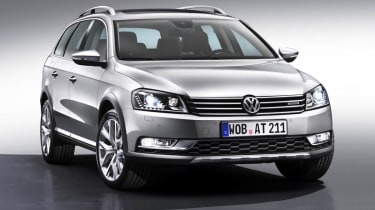 Volkswagen has unveiled its new Passat Alltrack. As its nametag suggests, it boasts 4MOTION four-wheel drive and a jacked-up ride height, endowing the Passat with new off-road ability. At just over 4.7m long, it’s the same length as the Passat Estate it’s based on, while its 1.8m width is also identical, despite flared wheel arch protection. Raised suspension gives a greater ground clearance, though – up 30mm to 165mm – which helpfully ups approach, departure and breakaway angles, assisting the cresting of hills and the covering of knobbly ground. In most driving situations, 90 per cent of the Passat’s power drives the front wheels, though nearly all of it can be sent to the back axle via a Haldex clutch if the situation requires. There’s a bunch of other technology to assist with rough-terrain stability, too, including hill-descent assist, altered ABS for loose surfaces and tuned electronic differential locks. Cars fitted with a DSG twin-clutch gearbox also benefit from an altered shift pattern when off-road mode is activated. The engine range is diesel-only, with a pair of 2.0-litre TDI units available. There’s a 138bhp tune with a six-speed manual gearbox and a 168bhp engine hooked up to a six-speed DSG transmission. Alcantara upholstery and a tyre pressure monitoring system are among the standard equipment. Further spec details and prices will be revealed closer to the car’s April on-sale date, but expect the Volkswagen Passat Alltrack to sit neatly between its Skoda Octavia Scout and Audi A4 Allroad cousins, costing around £25,000.