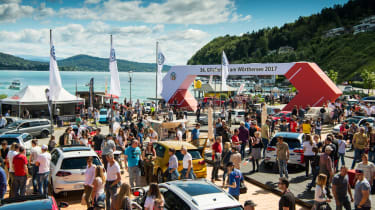 You either get the Volkswagen “scene” or you don’t. What you can’t deny is that in terms of pure numbers and global reach, few automotive hobbies are larger

More than eighty years since the People’s Car was conceived the brand trades places with Toyota and General Motors as the world’s biggest automobile producer, but you’ll also find more rapidly enthusiastic fans of the marque - and its associated brands - than you will for almost any other car.

> Read all our Volkswagen reviews here

Wörtherseetreffen is a concentrated dose of this enthusiasm - passion for Volkswagen Group products distilled until you’re left with only people who live and breathe the brand and have it tattooed indelibly into their skin - dropped into a small Austrian town by the side of the eponymous lake Wörthersee in the country’s south.

Reifnitz, the town in question, is rather pleasant in itself. I expect it is anyway, but with tens of thousands descending for the car festival each year it’s difficult to imagine it in quieter times. Every square inch of the place seems to be covered by cars, either parked, looking for parking, or effectively parked in an extensive queue of vehicles that renders most of the community’s roads immobile. 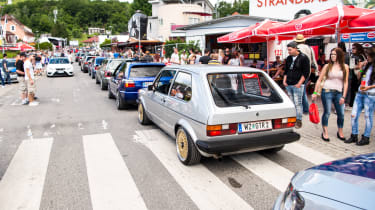 A small lake-facing park in the centre of the town is occupied by Volkswagen’s enormous official stand. It’s where you’ll find der Stein Golf - as the name suggests, a VW Golf (Mk2, in this case) carved entirely from stone. The clichés almost write themselves these days. Every car park and spot of open grassland in Reifnitz becomes its own localised car show, almost inevitably to the tune of pumping techno or pop music from the 1980s that Austria seems to have only recently discovered.

It isn’t, thankfully, just a show for people with lowered Golfs. Think of a Volkswagen or wider group product and it’s probably here - some stunning Mk1 Sciroccos are in attendance, a small but significant collection of older aircooled VWs, and at least one of just about every Audi, SEAT and Skoda you’d care to name. A few Lamborghinis too, though no Veyrons nor Chirons seemed to be present. 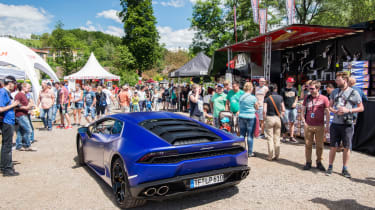 No modifying style is left unexplored either, from cars that look like they’d done a few laps at the Nurburgring, to style-over-substance show cars like the Audi A4 convertible whose exterior panels were trimmed entirely in leather and suede.

If there’s one thing the festival is missing, it’s any real action. An exploratory jaunt to the nearby town of Velden am Wörthersee - scene, we’re told, of some of the craziness that Wörtherseetreffen has become known for - turns up little more than a few wig-wearing spectators with a bawdy hand-drawn sign. The explanation is clear further up the road: police, ready to reprimand those bold enough to squeal their tyres out of a junction (and yes, we're aware the Jetta pictured isn't a real police car...). 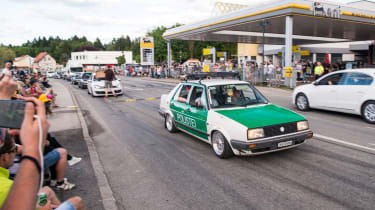 A sign the Treffen has grown moribund after all these years? Perhaps, and the quality of cars isn’t significantly higher - in fact, it might even be lower - than some of the dedicated Volkswagen shows you can find in the UK these days.

You won’t get a backdrop like lake Wörthersee at an airfield in the midlands, though. I’m still not sure I get the VW scene, but I totally get the location.

Click the images for a full gallery of this year’s Wörtherseetreffen, shot by Aston Parrott.