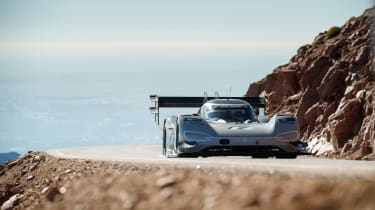 Volkswagen came, it saw, and it conquered Pikes Peak. Its time was not only a new record for the fastest electric vehicle to scale the 12.42-mile hill climb, but at 7min 57.148 secs, it also smashed the outright Pikes Peak record, held by Peugeot and Sebastien Loeb, by over 15 seconds.

Driven by the 40-year-old, two-time Le Mans winner and previous Pikes Peak winner Romain Dumas, Volkswagen’s I.D R Pikes Peak averaged over 90mph as it climbed the 5000ft, 156-turn course. Powered by its two electric motors developing in the region of 670bhp the car and driver had to contend with variable weather conditions on the only full course run they completed.

Volkswagen came, it saw, and it conquered Pikes Peak. Its time was not only a new record for the fastest electric...

As fastest qualifier, Dumas was the first car on the hill after the motorbike class had set their times. Starting in bright sunshine at the hill climb’s start (itself set at over 9,000ft) the VW driver powered through the lower third of the course to the first band of cloud, but it was on the higher sections of the peak, particularly as he closed in on the finish line at 14,115ft, that a thick blanket of grey cloud settled in, meaning Dumas completed the last phase of the climb, which includes some of the trickiest and most dangerous sections of the course, in low visibility.

The Frenchman’s achievement and that of Volkswagen Motorsport comes off the back of seven months of intense work to build and test the I.D R Pikes Peak car. While electric powered cars don’t suffer from the 20-30 per cent drop in power output that internal combustion engines do at these altitudes, the ever changing weather conditions meant the team had other challenges to face, such as aero performance – key to I.D R’s speed – and maintaining tyre and braking performance as the ambient temperature drops closer to the summit.

Having broken Loeb’s record, set in 2013 in a Peugeot 208 T16 Pikes Peak, it is now thought that the Pikes Peak record will only be beaten by electric cars in future. Over to you Audi, Porsche, Jaguar, Tesla et al…

Following Dumas up the hill some 25 cars later, Rhys Millen set a new production SUV record when his Bentayga W12 crossed the finishing line 10min 49.902secs after setting off. The previous record was held by Land Rover’s Range Rover Sport, which completed the course in 12min 35.610sec four years ago.