Classic ’80s hot hatch meets modern supermini bargain. The big question is, where will you put your money? 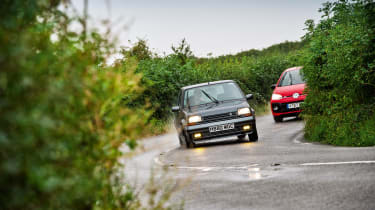 It’s not the Porsche 911 GT3 RS or the McLaren 600LT; the real ‘new car of the moment’ is the Volkswagen Up GTI. It’s not only those seeking an affordable entry point into performance cars who are lapping up the Up, either – there are people with supercars, limited-edition track cars and thoroughbred classics who are dedicating a small corner of their vast garages to the little hot hatch.

However, there are other small, front-wheel-drive performance cars in demand – second-hand ones. It won’t have escaped your notice that prices of 1980s hot hatches have shot up in recent years. Not too long ago worth only what their tinny bodies could be weighed in for, some are now well into five figures.

Still, the Up certainly looks good value from inside. There’s kit aplenty from the twice-the-price Golf GTI and everything has the solid feel you’d expect of a Volkswagen. The engine noise at idle is, perhaps, not as cultured as those of other Wolfsburg products, but it’s far from offensive. Make the motor work and it emits a harder growl – nothing too aggressive, but meaningful enough that you feel like you’re making progress. And you are, because the Up GTI is quick. Well, relatively, but certainly far quicker than you’d think sub-120bhp would ever feel in a car this size.

That’s where the surprises end, because everything about the Up feels so comfortable and natural, so after mere minutes of progress you’re confidently tipping it into corners, its tall body propped up by the firm suspension. It scurries from corner to corner with undwindling enthusiasm and you can’t help but encourage it along. Yes, you can pick holes in what the Up does: the wheel control is poor over rough roads and this erodes traction, and the engine’s excessive flywheel effect occasionally makes it tricky to make quick upshifts, while heel-and-toe downshifts are even harder. There are also times when you think the Up could relinquish a little more control to the driver and extend some of its childish joy to the driver aids (they can’t be disabled and in the wet cut in early to quell anything too exuberant). But then you remember that the Up really is cheap for a new performance car and offers oodles of instantly accessible, immediate, fuss-free fun, so you forgive each and every one of its foibles.

That’s once you have your hands on one, anyway. Such is the demand for the feisty little VW that there’s a seven-month waiting list. It might actually be quicker to scour the country for a clean Renault 5 GT Turbo…

You might imagine, with the 5 being one of the main objects of the Max Power generation’s glassfibre and P38-filler fetish, that standard ones would be hard to come by. But, remarkably, there’s a serious lack of bad-boy bonnets, three-spoke wheels and satellite-sized subwoofers in the GT Turbo classifieds. Most examples are absolutely standard, which is a boon, as a stock 5 GT Turbo is an absolute treat. Its smooth, pear-shaped body isn’t conventionally pretty, but it’s so distinctive, with just enough presence from its blocky arches and bumpers and flashy decals, that it’s easy to fall for. Still on the fence? Let me draw your attention to the yellow fog lights. You absolutely can’t resist their Gallic charm, can you? 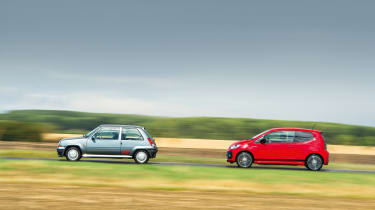 The 5’s dash makes you long for more freedom in modern car design, with curves, angles and quirks that make the inside of a McLaren 720S look humdrum. But touch any part of it and it feels as though it might disintegrate. That said, as it approaches 100,000 miles, this car has worn far better than you’d expect, with just the squeaks and rattles that came as standard with most cars in the ’80s. The seats are soft and supportive, the gearstick substantial, and not only is the steering wheel the ideal size, it also has the correct balance between quirky looks and motorsport influence. Perfect.

The engine is surprisingly quiet. The loudest thing you can hear is the electric fan when it cuts in (it runs for a while after you switch the engine off – a tweak that was intended to cure the hot-starting issues of early GT Turbos) and the four-pot’s hushed tones make it seem friendly and approachable. One prolonged stamp on the throttle changes all that. This is ’80s turbocharging, so there’s a significant amount of rather steady acceleration before the needle on the Jaeger turbo-boost dial pings to the end of its range and a moment later the Renault surges forward. It may be old, but it certainly isn’t slow. When it’s on boost, the surprisingly quick Up struggles to keep up.

On tarmac that hasn’t seen rain for weeks, the idea of a car with no traction or stability control and no ABS – let alone one from an age when the biggest killer was lift-off oversteer, or so I’m told – means corners are an unnerving prospect. But there’s no need to worry, as there’s so much travel in the suspension; it’s soft, supple and, without much mass to keep in check, provides plenty of control, so the car never snaps or bites back aggressively. As a result you can comfortably play with the 5’s limits: Will it oversteer with a lift of the throttle? Can you spin the wheels if you’re a bit eager with your right foot? Will the brakes lock up? Yes, yes and yes. But the car’s tiny size means you have room to experiment, even at the speeds the GT Turbo likes to operate at. 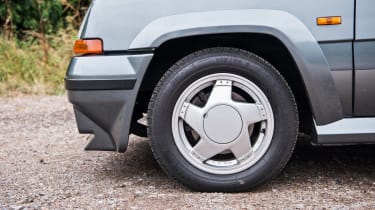 A good stretch of road with a variety of corners and a change in elevation is enough to make you forget this is a delicate old car. Coming to a stop in this particular example brings it all back to the fore, though. The drain of the lights, wipers and fan on the alternator means that, unless you brush the throttle with the outside of your foot every time you come to a halt, the engine stalls. I’m sure a twiddle of the carburettor’s idle screw would fix the issue, but it shows that even the best 5 GT Turbos will need constant attention.

Catching sight of the mess of hoses, wires and heat shields under the bonnet might be enough to put off the amateur mechanic. However, GT Turbo specialist Bob Beamond of CGB Motorsport says that they’re simple cars to work on: ‘There are lots of hoses and it’s a lot of engine in a small space. I think that’s what makes it look a bit daunting. But it’s all quite simple mechanics; there are no computers in there and only a little electrical wiring, and the engine is basic.’

Still, it’s a classic car and no matter how much money you’re initially willing to fork out, it will require attention and more cash to keep it in the same condition. Any grand plan to make a fortune on an appreciating classic could easily be dashed by maintenance costs, unless you’re very lucky or, god forbid, you simply don’t use it. That would be a sin, because on a base level the Renault is a better driver’s car than the Volkswagen – you, and only you, are in charge, and there are deeper layers to explore. However, the Up counters by being an instant pleaser with no worries to distract you from the fun, and as a result you’re likely to spend more time behind its wheel with a smile on your face. 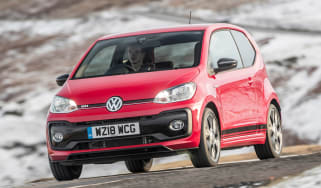