Looking ahead at the future of executive travel, the I.D Vizzion saloon is VW’s latest electric concept car 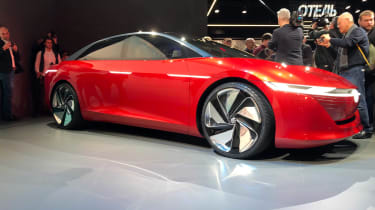 Volkswagen has taken the covers off its I.D Vizzion Concept, a large executive saloon focused on autonomous driving and the company’s next generation electric powertrains. At a glance, this I.D concept might not look like the next generation electric car VW claims it is, but take one look inside the cabin and you’ll notice what’s not there, rather than what is.

That’s because this I.D Concept’s most intriguing feature is that it does without a steering wheel altogether. Previous Volkswagen I.D concepts have offered some level of autonomy, but a steering wheel has always been present in one form or another. The I.D Vizzion can ditch its driver controls because it’s a ‘level five’ autonomous vehicle, claims VW.

For those, us included, who aren’t really sure what the autonomous levels actually are, level five autonomy represents the final step on the ladder towards completely driverless cars. Under agreed legislation, level five takes full control of the vehicle with no need for driver intervention under any circumstance. This explains the stark interior’s complete lack of any driver controls.

evo readers will be totting up their own lengthy lists of the disadvantages of the I.D Vizzion’s approach but one of the advantages is that Volkswagen’s designers have been able to think about the cabin in a completely new way. Without the need to give full attention to the road, drivers have suddenly become passengers, prompting the whole design thought process to be shifted towards the interior being a more social space.

What hides underneath the I.D Vizzion’s conservative skin is the same modular MEB platform that will go on to underpin a majority of VW’s future electric vehicles. Power is directed to two electric motors, one on each axle, with energy coming from a 111kWh battery pack that sits under the passenger cell, much like many other electric cars including the Tesla Model S. The dual axle motors also give the I.D Vizzion all-wheel drive and combine to produce a 225kW, or 306bhp, power output.

Volkswagen says that the I.D is rated at a peak range of 413 miles between charges under the NEDC cycle, but is still able to reach 62mph in a reasonable 6.2 seconds. This may be no Tesla Model S P100D in terms of performance, but when you have no control of its trajectory, we doubt this would be much of an issue. The concept car nature of the I.D and the rapid development in battery technology does mean these figures are unlikely to remain static if VW ever decides to put a model like this into production, but as a yardstick of VW’s progress in electric vehicle development, the I.D Vizzion’s figures are crucial to its reputation in battery tech. 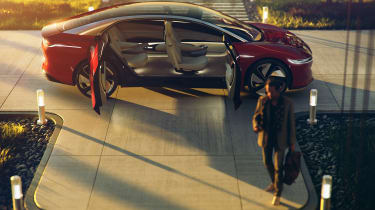 Something that is less futuristic about the I.D is its appearance, the car taking cues from what many would consider to be a traditional luxury vehicle. At 5163mm long, the I.D is a similar length to today’s luxury saloons such as the Mercedes-Benz S-class and Audi A8, but thanks to the lack of a conventional powertrain, interior space is vastly more accomodating. Otherwise the relatable three-box shape could be sourced from any other car, and in silhouette at least, mimics that of VW’s own Arteon.

The design language itself is also familiar, having been applied on other I.D concepts released over the last few years. The first of these concepts, the I.D hatchback, is due to reach series production next year, where we will see for the first time if Volkswagen’s distinct drive towards electric vehicles after its disastrous handling of the Dieselgate saga could start rebuilding its environmentally friendly image.

As is so often the case, these sorts of electric cars, especially ones designed purely for autonomous driving, seem to contradict our own thinking on what cars ought to be. Progress is progress however, and VW’s push to secure its place at the top table in a future full of autonomous, electric vehicles is understandable. Most car enthusiasts will, of course, hope that this particular futuristic Vizzion never comes to pass.