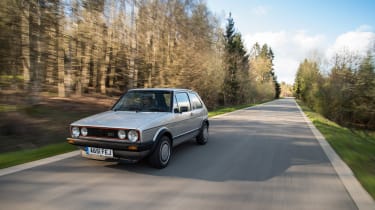 The exploration continues as orange sky turns to purple and commuter traffic slowly dissipates from the roads. 115mph. 120mph. Here the markings stop, but the needle keeps circumnavigating the dial. Had VW’s engineers had the foresight to daub ‘130mph’ on the dial we’d have hit that too, but the satnav gummed to the windscreen suggests those engineers would also have been optimistic – a nav-verified 115mph is where I lift.

We attempt the run again the next day on the stretch between Duisburg and Wolfsburg. Aston installs himself in the back seat – surprisingly easily, reaffirming the Golf’s family-car billing – and aims his lens over my shoulder. It’s busier today and the three-lane Autobahn is if anything more intimidating than yesterday’s two-laner. With just two lanes to play with you can be more decisive. If there’s traffic overtaking in front, you slow down. With three, who knows? Will that car overtake the car overtaking a lorry? Or will they remain in single file? Do I keep my foot in it? 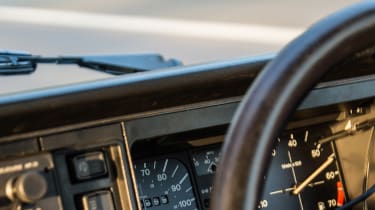 I find myself erring on the side of caution – 1984 braking technology and ’70s crash structures are best left untested – but I still match the previous day’s speed. Indeed, the GTI does so and holds it up a slight incline. There’s more to come, but with commuter traffic and several restricted sections, no further opportunities arise.

The lower pace does give me a chance to survey the many instruments strewn around the GTI’s cabin. Speedometer and tach are located front and centre, the latter housing a coolant temperature gauge alongside the one for fuel – another detail separating it from a cooking Golf of the day. Even in a long, nose-to-tail bottleneck, the coolant needle seems happy to sit around the middle point and the warning light never illuminates.

Between the two main dials sits a bank of domed idiot lights and a liquid crystal trip- computer display. It’s one of few items on the car showing any real age, a black smudge between its layers rendering half of it unreadable. Above the warning lights is a hint at the early days of the GTI’s post-fuel-crisis conception: an mpg gauge with a change-up light that indicates when you could get the same rate of acceleration in the next gear, thus saving fuel.

A bank of non-standard VDO gauges low in the centre console complement the main instruments: a clock, a voltmeter and an oil- pressure dial. The voltmeter comes to illustrate the term ‘ignorance is bliss’ over the course of the trip, and its dive into the red zone whenever I dare to use any of the Golf’s auxiliary functions sees a corresponding increase in blood pressure. I’d seriously doubted the car’s ability to restart shortly after picking up Aston, as the last stretch had required main beams and sidelights – a process that had the orange needle hovering around the ten-volt mark. Other functions that have the gauge seeing red include ventilation, indicators, braking, and using the original Blaupunkt stereo. I can live without the stereo, as efforts to awaken it result only in heart-stopping bursts of static or brain-melting pop songs, but I’m rather partial to cool, flowing air, and braking too despite the hardware’s general disinterest. 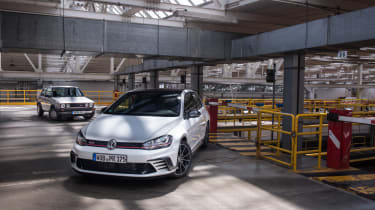 The volts hold, and we roll into Wolfsburg around lunchtime. The city is quite compact, but without the sprawling VW plant it would be little more than a small town. Driving in from the west, Volkswagen’s operations stretch as far as the eye can see, with white factory buildings, slim chimneys and parking lots full of polythene-covered cars ready for delivery across Europe. Despite VW’s occupancy, it’s far from the dystopian industrial landscape I was somehow expecting, and beyond the factory buildings the city even seems quite leafy.

We pull up in front of the Autostadt towers in the heart of the city, joined by the new Clubsport. A gaggle of the park’s two-million yearly visitors immediately gathers and smartphones emerge. Most snap photos of the Mk1. I join them, and ponder answers to my original questions.

Do I regret missing out on Mk1s when they were cheap? Probably not. Great car though it is, it hasn’t quite got under my skin this time around. Which is fantastic, as I can now avoid spending much greater sums on one today. It wasn’t a chore to complete 850 miles in the GTI, though. This old hot hatch is every bit as useable as it was back in the day, it seems. And fun, too, though hot hatch performance has moved on a great deal and the experience the Mk1 offers lacks the intensity, if not the interaction, of its modern counterparts. But as a crowd of admirers continues to shun Clubsport for Mk1, you could argue that in some respects, the original is still the best.