The VW Golf GTI's more powerful brother, the R20, is spied out testing at the Ring 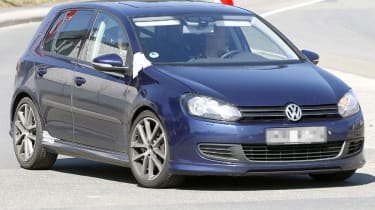 A new top of the range, high-performance Volkswagen Golf Mk6 has been spotted at the Nurburgring. The R20 (neatly disguised by sedate TDI badging) is a replacement for the R32 of the Mk4 and 5 generation, which utilised a 3.2-litre engine. In the new car the 3.2-litre has been replaced by a 2-litre turbocharged four-cylinder engine producing about 270bhp.

The new engine is the same one used in the Audi S3 so we can assume that 0-60mph will come in just under six seconds as it does in the Audi, although with an RS3 in the pipeline, the R20 may not be the VW group’s hottest hatch for long.

With the R20 being a more powerful, tuned version of the GTI, you’d expect that the tuned version of the Focus ST, the RS, would be a natural rival. The high-performance Ford Focus RS trumps the R20 for power with 300bhp and a top speed of 163mph. The front-driven RS makes it to 60mph in 5.9 seconds, which, at an educated guess, could be slower than the all-wheel-drive Golf and its superior off the line traction. The R20 has a tough run to compete with the RS’s reputation for performance and handling but on paper at least, it seems to be keeping up.

R32s of the past have always been relatively understated in their design; a body-kit and two centrally mounted exhausts are normally the only changes made to the standard Golf’s exterior. From the spy-shots it looks as if this new addition to the R range is no different in its relatively subtle modification. The RS, on the other hand, sells itself on its bright colours, big spoiler and huge wheels. Performance and price may be roughly the same but the real distinguishing factor may simply be a case of taste.