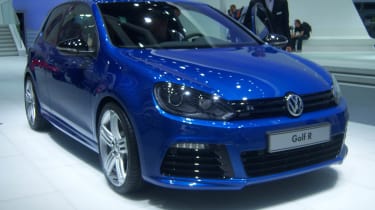 Taking the fight to the Ford Focus RS, Volkswagen has unveiled the Golf R, the most extreme hatchback ever to emerge from Wolfsburg.

First, the important figures – 266bhp, 236lb ft of torque and, with VW’s DSG gearbox, a 0-62mph sprint that’s out of the way in just 5.5sec (5.7sec with the manual transmission) and onto a predictably limited 155mph.  All this from a revised version of the turbocharged 2.0-litre four-pot from the previous generation Golf GTI and current Audi S3.

Like the R32, power is put down through all four wheels, with a new four-wheel-drive system that’s been designed to react more quickly than the R32’s Haldex transmission.  As for the chassis, the R’s suspension has been uprated and lowered by 25mm and gets a modified ESP programme and more responsive steering.

VW has kept the visual changes subtle over the new GTI, although LED running lights, a rear diffuser, central exhausts, xenon headlights and a handful of ‘R’ badges are all part of the package.  Inside, Alacantara seats, piano black detailing and blue instrument needles also put in tasteful appearances.

Check out the latest from the Frankfurt show here on evo