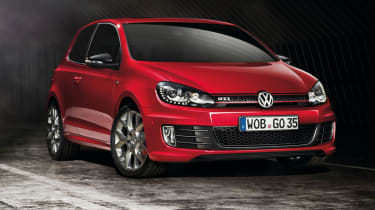 Volkswagen has revealed its Golf GTI Edition 35. With impeccable timing, it follows the Edition 30 of 2006 and the 25th Anniversary Edition of ten years ago. It celebrates the hot hatchback’s increasing legacy, which now stretches well into its fourth decade. Like its similarly tagged forebears, it gets extra power and a subtle sprinkling of cosmetic tweaks. Its 2-litre turbocharged petrol engine gets a 25bhp hike, from 207bhp to 232bhp, which should help it in the fight against the Renaultsport Megane 250 and SEAT Leon Cupra. It should better the regular GTI’s 6.9sec sprint to 62mph and 149mph top speed. And while it looks largely similar to a regular VW Golf GTI, there are some neat changes to help differentiate it for those in the know. The front bumper gets a refreshed look while there’s a new multi-spoke, 18in alloy wheel design dubbed ‘Watkins Glen’, a nod to the New York race circuit. Firmer details will be revealed after the Volkswagen Golf GTI Edition 35’s unveil at the annual GTI meet at Worthersee from June 1 2011, but with a German price tag of 30,425 euros, expect to pay around £27,000 when the Edition 35 goes on sale in the UK later this year. That represents a rise of around £2K over a standard Golf GTI.

Hot hatch rivals battle it out on track