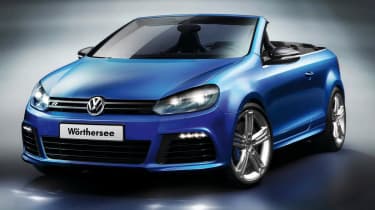 7
Volkswagen is displaying its new Golf R Cabriolet concept at the world’s largest GTI meet in Austria. VW fans from all over Europe will be able to see the fastest ever iteration of the much-loved Golf Cabriolet at Worthersee, where the GTI-Treffen car show is celebrating its 30th year.

The R cabriolet develops 266bhp and 258lb ft, the latter produced at just 2500rpm. The turbocharged engine boosts up to 1.2bar and is good for a 0-60mph time of less than 6 seconds and a 155mph top speed.

The interior has also been upgraded with the addition of leather Recaro seats, piano black detailing and sand-blasted aluminium details such as the door sills.

It remains to be seen if Volkswagen will put the R Cabriolet into production, but it certainly demonstrates the potential of the mk6 soft-top. And public reaction at Worthersee suggested a production car could be more than likely.

There is also a GTI Cabriolet concept impressing crowds, but with the Golf Cabriolet currently available with the same 207bhp engine found in the hatchback GTI, Volkswagen hasn’t yet confirmed if an official GTI-badged cabriolet is on the cards.

Volkswagen started the hot hatch craze 35 years ago and is celebrating by releasing the “anniversary” GTI Edition 35 which will also be on display. GTI fans will certainly get their fix at the Volkswagen stand on this special year for both the show and the car.