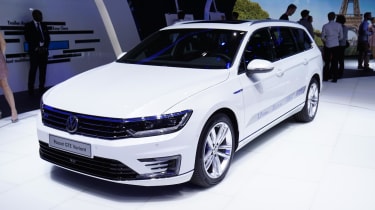 Hot on the heels of the Volkswagen Golf GTE plug-in hybrid, VW has given its new Passat the same treatment ready for its debut at the Paris motor show.

The Passat GTE, available in both saloon and estate body styles, aims to mix 8-second 0-62mph and 136mph performance with an NEDC combined fuel economy figure of 141mpg and CO2 emissions under 45g/km.

To that end, the Passat GTE features the same drivetrain as that of the smaller Golf GTE. At its heart is a 1.4-litre TSI petrol unit and three-phase electric motor, sending their power through a six-speed DSG transmission. Each drive source has its own power and torque outputs at differing engine speeds, but combined the pair develop 215bhp and 295lb ft of torque

Here, a tweaked DSG uses not two, but three clutches. The third is used to disengage the TSI unit from the driven axle, allowing the electric motor to drive the car on its own. In this E-mode the GTE's 9.9kWh battery pack supplies enough juice for 31 miles of all-electric driving, at speeds of up to 80mph. If you've run it completely flat, VW says it'll recharge from a household outlet in four hours and 15 minutes.

The other drive modes also equally self-explanatory. A Battery Charge mode allows drivers to top up the battery while driving, before entering as-yet nonexistant zero-emission city centres, while Hybrid mode mixes electric and petrol power as the car sees fit, depending on driving conditions.

VW has also tweaked the GTE's styling to differentiate itself from other new Passats. C-shaped LED daytime running lights join a new chrome grille with blue detailing, 17in alloy wheels and GTE badging echoing details found on other recent plug-in models from VW. The blue theme continues inside, found in the car's ambient lighting and in the cabin's decorative stitching.

The GTE's UK order books open in June 2015, with deliveries starting that October. In the meantime, prospective punters can catch the car at the upcoming Paris motor show, which opens to the press on October 2.