It could be a junior RS4 – but is it really? 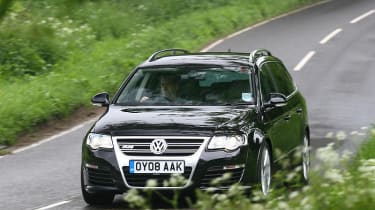 Take a good hard look at this car, because the chances are it’ll be a long time before you see one on the road. Not that the 3.6-litre V6-engined Passat R36 is a bad car per se. Far from it in fact. It does most things pretty well, and some very well indeed. But, to cut to the chase, who’s going to buy the thing?

Just in case you hadn’t noticed, mid-range family cars with thumping great petrol engines aren’t exactly flying out of the showrooms right now, and if Mr Threebed-Detached actually plucked up the courage to buy one, what do you reckon he’d get for it in a couple of years’ time when there are all those nice turbodiesel BMWs and Audis to choose from?

So, bottom line, it’s got to be bloody exciting, something that petroholic drivers like us will ache to own – a bit like an Audi RS4 in fact. Which brings us to the image problem. And the problem is, the Passat doesn’t really have an image. The R36 should be the opportunity to sex up the whole Passat sub-brand, but despite subtle visual tweaks – too subtle perhaps – the R36 estate we drove looked like an executive hearse, while the ‘Latte’ trim and brushed aluminium highlights evoked the ambience of a private dental practice. The seats are good though – really grippy, and with adjustable side-bolsters – while the chunky, sculpted wheel is nice to hold and the backlit instruments with their blue needles look cool. It all feels pleasingly robust, too, though neither as posh nor as sporty as an RS Audi.

The engine is a bored and stroked version of the R32 Golf’s V6, and the resultant 296bhp makes this the most powerful Passat yet. With its standard-issue six-speed DSG ’box, it’s said to be good for 0-62mph in 5.8sec (5.6 for the saloon). It feels that brisk too, and at high revs it emits a muted but very pleasing yowl, though you do have to work it hard, for the R36 wagon feels every one of its quoted 1747kg.

Trouble is, the rest of the car never quite seems up for it. The steering feels initially meaty and direct but never really comes alive. The uprated suspension, lowered by 20mm and firm to the point of thumpiness around town, displays impressive control when you’re blatting across country, but the 4MOTION four-wheel drive is set up for swift and secure progress rather than the playfulness and involvement of an RS4. Where it does recall fast Audis of yore is in the braking department. The R36 gets natty blue ‘R’ calipers to grip its ventilated discs, but they’re overservoed at low speed, the pedal displaying all the sensitivity of Piers Morgan reducing some seven-year-old tap-dancing orphan to tears.

Too profligate to appeal to most private buyers, but too sensible to seriously tickle an enthusiast’s fancy, it’s hard to see much of a market for the R36. Look out for a second-hand one in three years’ time, though. It’ll be a steal. But you might have to look hard…