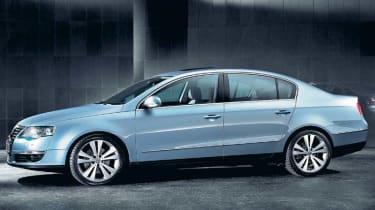 Can a Passat ever have evoness? Discuss. On past showing, I would say not. Even the 4Motion with the lusty V6 engine was a bit aloof from the action for all its pace and grip, just like the Audis its underskin credentials so closely resembled.

Yet here is Volkswagen making noises to the effect that the all-new, just-launched Volkswagen Passat TDi 170 is a viable rival to BMW's new 3-series. Crikey. A place in the premium club and top-class dynamic delights in one fell swoop of reinvention.

Most past Passats have been heavily Audi-related, but the version that ran from 1988 to 1996 was like a big Golf underneath: transverse engine instead of longitudinal, torsion-beam rear suspension with a hefty dose of passive rear-steer. It was much the most entertaining to drive. And now this latest Passat is, again, virtually an expanded Golf. Which means, this time around, a rear suspension system very close to the one that made Ford's Focus the new handling benchmark of its time.

So the signs are promising, especially as the engine range will by year's end include a 170bhp, 2-litre turbodiesel (the most powerful 2-litre oil engine yet seen), the 200bhp FSI turbo engine used in the Golf GTI, and that 250bhp, 3.2-litre VR6 we know from other VWs. There'll be four-wheel-drive transmissions, too.

How the all-wheel-drivers will feel I can't tell you yet, but of these rapid Passats I have at least tried the 170bhp TDI. I've also sampled the 140bhp version, plus the mainstream 150bhp FSI petrol engine.

First, though, the looks. It's kind of Phaeton-meets-Audi at the front, with a great splash of chrome around the grille and the air intake below. A swage line on the lower flank rises and flares out as it aims for the back bumper, and the rear side windows are remarkably like those of, yes, the new 3-series. Move to the tail, and you'll find four round lights lit by rings of LEDs.

Now inside, where the previous Passat's lush solidity made you wonder what the point was of buying an Audi when you could have the same ambience for less money. Anyway, there's less confusion this time; Volkswagen realised it didn't have to make the new Passat quite as Audi-like, so has saved money. It hopes we won't notice, but we do.

First impressions are good. The top of the facia seems to float above the lighter section below, the door trims are intriguingly shaped with a ridge curving and fading down from door mirror to rear edge, and the driver's door switch console seems, like the facia top, to float separately from its surroundings. Chrome rings the dials, and the optional wood, though thin and flexible, is real.

So what's wrong? Too much hard plastic, notably in the door trims, and a lightweight, flimsy feel to parts that move. The Passat is now average for perceived quality, not class-leading. It's very roomy, though, and Volkswagen will say that the money saved has been diverted to equipment and technology. Examples (some optional): Keyless starting, an automatic parking brake on all wheels, a hill-holder/creep-stopper for the automatics, a 230V socket for your laptop, a built-in, pop-up keypad to link with your Bluetooth phone.

It handles very tidily. Rides very tidily too. You need one of the torquier engines to get the throttle/cornering line interactivity going, which makes the lowly 1.6 a dull (and rather resonant) drive, but switching from that car to the 140bhp mainstream TDI uncovers the talent beneath. The Passat hooks into a corner and won't let go, pointing and flowing much as its closest dynamic rival, the Honda Accord, does. The tail helps point the nose in pleasing fashion, but the steering clouds the picture. It's electric, like a Golf's, and has a dead patch as you start to turn. Then it goes momentarily glutinous before feeling right.

As for pace, the 140bhp TDI both feels and is faster than the 150bhp 2.0 FSI, such is the state of today's diesels. Neither engine has been a paragon of refinement in other applications, but they're civilised here. And that 170bhp TDI? Versus the 140, it shaves 1.1sec from the 0-62mph time and feels very lusty, at the cost of some combustion percussion. It's particularly pleasing with the double-clutch DSG sequential transmission, a six-speeder like the manuals, although the DSG novelty might wear off on people like us.

So that's the new Passat, a good car but still no 3-series rival. As if...