The new Volkswagen Passat Alltrack - a cut-price Audi Allroad, if you will - driven for the first time 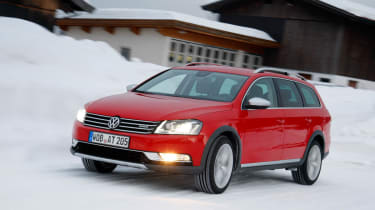 The Volkswagen Passat Alltrack, VW’s big estate car with raised ride height and four-wheel drive. A cut-price Audi A4 Allroad, if that helps. An all-new variant, it sits at the very top of the Passat range, with prices set to start at around £28,500 when sales begin this April. The TDI 170 DSG tested here is expected to cost £31K.

Plenty, and all in the name of off-road ability. The regular Passat’s 135mm ride height is upped to 165mm on the Alltrack, which helps significantly up its ramp breakover angle and approach and departure angles. 4MOTION four-wheel drive is standard fit; in normal driving, 90 per cent of power goes to the front wheels, but should conditions require, nearly all of it can be sent to the back by a Haldex clutch taking up torque at the rear axle. A selectable off-road mode – also standard – activates a hill descent system as well as altering ABS and ESP settings, and shift patterns should your car have a DSG automatic gearbox.

There’s plenty of gadgetry on the options list, too, with lane assist, blind-spot monitoring, a self-parking system and a trick auto high-beam mode for the headlights among the features fitted to our test car.

Engine options in the UK are limited to 138bhp and 168bhp tunes of Volkswagen’s tried-and-tested 2.0-litre TDI diesel engine, the former with a six-speed manual gearbox as standard, the latter a six-speed DSG auto. European buyers can choose a DSG-equipped 208bhp TSI petrol model, which gets the same engine as the mk6 Golf GTI.

From a Thrill of Driving standpoint, not spectacular. But then this isn’t a car for clipping apexes in, it’s a thoroughly practical estate car that’s more than ready for tackling the tough weather conditions that are increasingly pushing people into SUVs. And it’s here where the Alltrack’s case is strong – if you need AWD capability but don’t particularly want a towering driving position (or the difficulty of parking a two-and-a-bit ton bus), it could well be perfect.

It’ll change direction with more precision than most SUVs, and with little more weight than a regular Passat to shift, it can be hustled along briskly and reasonably economically (the 138bhp car averages 49.6mpg). It drives just like any other Passat; the ride is supple, the steering nicely weighted and body control is excellent. It’s all very competent, just not particularly captivating.

Same goes for the top-spec TDI/DSG combination fitted to our test car. It’s not a setup to put fire in a driver’s belly, but it’s perfect for the Alltrack. While we weren’t able to give it a proper off-road test (just some snowy and slushy tracks to negotiate), its abundant torque and slick-shifting auto are sure to make crossing tougher terrain a doddle.

Priced from around £28,500 when sales begin in April, the Passat Alltrack will undercut Audi’s entry-level A4 Allroad by around £3000. The slightly smaller and slower Skoda Octavia Scout costs £22,720 in 138bhp TDI trim, though the Alltrack goes someway to justifying its healthy price premium with satnav, Alcantara interior trim and 18in alloys among its standard kit. It’s also a product that looks and feels suitably premium.

The Alltrack can tow an extra 200kg compared to a regular Passat (up from 1800 to 2000kg), so if you’ve a racecar or track toy to transport, it’s a plusher-appointed and classier choice than a raggy old off-roader.

The Volkswagen Passat Alltrack is available now from £31,000.