The Polo BlueGT has been announced at the Geneva, combining a potent 138bhp 1.4 TSI engine, with BlueMotion technology. 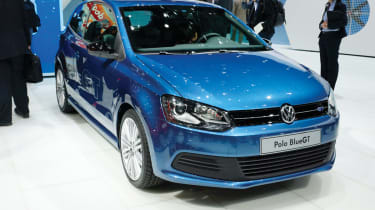 The idea behind the Polo BlueGT, unveiled at the Geneva motor show, is to mix the fun and performance offered from the GTI model, with the economy of the BlueMotion range. UK availability hasn't been confirmed, but is scheduled to go on sale in Europe in July 2012.

Under light and medium loads, the second and third cylinders are automatically shut down. If the driver presses the accelerator pedal, the two cylinders are imperceptibly reactivated.  All mechanical switchovers occur within 13 to 36 milliseconds, depending on engine speed.

Other than the new engine, the Polo BlueGT is distinguished from the standard car by borrowing a few parts from the GTI (Like the rear spoiler, and both bumpers) and a set of new multi-spoke 17-inch alloys.