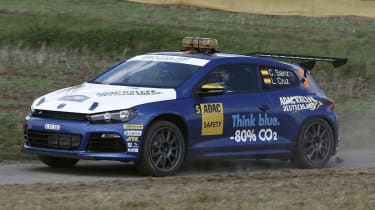 Volkswagen has given the Scirocco R performance coupe its rallying debut. The bio-powered car appeared at WRC Rally Germany as a course car, so didn’t compete, but dropped major hints (and fuelled ongoing rumours) that VW will officially enter the WRC, perhaps from 2011. The car uses the 2-litre TSI turbocharged petrol engine from the Scirocco road car, but the Cup racing version runs on natural gas, cutting carbon emissions by a whopping 80 per cent while producing an extra 10bhp, taking the R’s total power output to 271bhp. Some rallying modifications allowed the Scirocco Cup car to entertain spectators with a couple of demonstration runs in Germany, with legendary WRC pilot Carlos Sainz and VW Touareg off-road racer Nasser Al-Attiyah sharing the driving duties. Sainz said – ‘It was nice to take an excursion into the WRC world again. I saw many old acquaintances and many familiar faces again and used the opportunity for an exchange with old companions from my days in the World Rally Championship. Being allowed to open the course with the Scirocco was an honour for Volkswagen and of course for me as well.’ While the Scirocco’s appearance no doubt whetted appetites for its appearance next year in full rallying colours, that won’t be able to happen: the car is too big for the new 2011 regulations. That doesn’t rule out a wide-arched 1.6 turbo Polo GTI appearing, though… Our John Barker’s Nurbrugring 24 hour race in a gas SciroccoWe road test the Volkswagen Scirocco R in the UK