Volkswagen's old EA113 four-cylinder turbocharged petrol engine is used in both the regular 2.0 TSI and the Scirocco R. It might not be as new and sophisticated as the EA888 found in the latest hot VW Group products like the Golf R or Leon Cupra 290, but it's hardly short of punch.

Previously seen in the Mk6 Golf GTI and Golf R and several others, the engine has served as a cornerstone of VW’s performance models and pushes out 178bhp in its lower state of tune and 276bhp at 6000rpm in the R. Torque outputs of 207lb ft at 1250rpm in the TSI and 258lb ft from 2500rpm in the Scirocco R ensure plenty of mid-range urge. 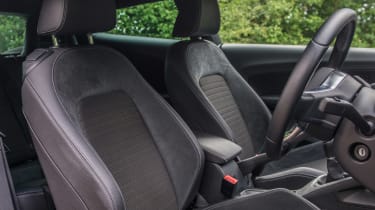 Either engine can be paired with a six-speed manual or Volkswagen's DSG transmission. As has become customary, DSG cars are both a little quicker and marginally more economical.

At the bottom of the range, and only available with the manual gearbox, is the 1.4-litre, turbocharged petrol unit. Developing 123bhp at 5000rpm, and 148lb ft at 1400rpm.

The turbocharged diesel models wear VW’s familiar TDI badging and come with a choice of six-speed manual or DSG gearbox. Two power outputs are available from the same engine. The first develops 148bhp at 3500rpm and the other 181bhp at the same engine speed. Torque is strong in both too, the 148bhp car developing its 251lb ft from 1750rpm and the higher-output car a full 280lb ft from 2500rpm – more than the Scirocco R.