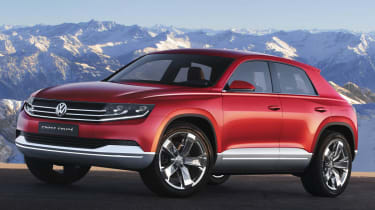 One of Volkswagen’s 2012 Geneva motor show stars is this Cross Coupe. While it might look startlingly similar to last November’s identically named concept (even the pictures, here, look the same), its powertrain is a little different. Gone is a petrol hybrid setup, replaced by a diesel hybrid system with some truly eye-widening stats. It’s said to combine staggering 157mpg fuel economy and 46g/km CO2 emissions with 302bhp and 137mph performance. For a 1.8-ton SUV, that’s all rather impressive. Prior to the Geneva show doors swinging open, strict details are thin in the ground. We know that a plug-in hybrid system mixes a direct injection turbodiesel engine with two electric motors; if Geneva’s Cross Coupe concept is anything like Tokyo’s, then there’ll be a motor at each axle to make the car four-wheel drive. While the Cross Coupe looks every inch the Range Rover Evoque and Audi Q3 rival, it’s not a near production ready SUV to wade into battle with them. Instead, its official role is to showcase Volkswagen’s current drivetrain developments while subtly previewing design cues for the next Tiguan soft-roader. A road going Cross Coupe is possible, though, and with Evoque and Q3 sales charts on fire at the moment, we’d bet good money a production car resembling the concept appears in the next few years. A more conventional engine range would seem likely in the short-term, though.