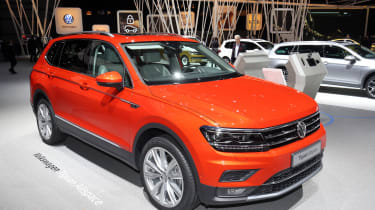 VW now offers a bigger, longer and more practical version of its Tiguan crossover, named the Tiguan Allspace. The new SUV closes the gap between its premium off-roader, the Touareg and the compact Tiguan. The Allspace will sit between the two VW SUVs in terms of price and will start at approximately £25,703, although UK prices have not yet been confirmed. The Allspace made its European debut at this year's Geneva motor show having premiered at the Detroit show earlier this year.

To create the Allspace VW has extended the length of the Tiguan’s wheelbase by 109mm, and made the whole car 215mm longer. The increased size has meant that the Tiguan Allspace has a rather capacious boot, one now big enough to fit an extra row of seats to make it a seven-seater.

The Allspace looks very similar to VW’s other SUVs, but unlike the standard Tiguan and Touareg the new car has ridges that extend the length of the roof, much like those found on older off-roaders like the Land Rover Defender. A large panoramic glass roof is also available, but if that option is ticked the raised lines on the roof are restricted to just the rear.

Its rugged looks are accentuated by grey underbody protection and wheel arches. However, for those who might venture into the rough the Tiguan Allspace there’s the ‘off-road package’ that comes with an engine protection panel that extends up to the bumper. As well as making the underside more durable it improves the Allspace’s approach angle by 7 degrees. 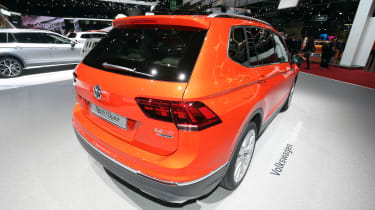 The Allspace comes better equipped than the ordinary Tiguan; as standard you get roof rails, a colour infotainment screen that allows you to connect your phone, and a multifunction steering wheel. Top spec Highline models get LED headlights, keyless entry and an infotainment system with gesture control. Further options include the aforementioned extra row of seats and a retractable tow-bar.

The Tiguan Allspace is available with a choice of petrol and diesel engines, two- and four-wheel drive and manual or dual-clutch transmission. The petrol engines range from 148 to 217bhp, while the diesel engines start at the same power but go up to 237bhp. Every diesel Tiguan Allspace is outfitted with a twelve-litre AdBlue tank to help reduce nitrogen oxide emissions.

Both the two- and all-wheel drive versions of the Tiguan Allspace are adept at towing, the front drive models are able to pull 2.2 tons while the maximum permissible weight increases by 300kg for the four-wheel drive cars.

All this sounds desperately practical and way beyond of evo’s usual realm of supercars, hot hatches and 500bhp saloon cars. However for those fortunate enough to have two cars, the more practical and affordable one of them is surely the second can be as equally crazy and wild. If the Tiguan Allspace means just one person can justify purchasing an Areil Atom, Lotus 3-Eleven or just a full-blown race car, then it will have earned its place in the world.