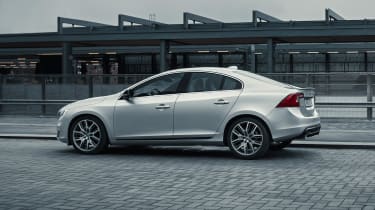 To honour Polestar Cyan Racing’s FIA WTCC (World Touring Car Championship) title victory at the weekend, Volvo has announced the Volvo S60 and V60 Polestar Performance World Champion Editions. The cars are sportier, Polestar-fettled versions of the Volvo S60 and V60 with a selection of performance upgrades that are optional on the regular models fitted as standard. No prices have been announced, but the pair are now available to order globally.

Thed Bjork drove his Volvo S60 Polestar TC1 to fourth place in the WTCC season finale in Morocco last week, handing Polestar Cyan Racing the manufacturers’ championship and securing the WTCC drivers’ championship for himself. To celebrate, Volvo is producing special S60 and V60 editions fitted with a collection parts from the Polestar Performance Parts program.

The upgrades apply to the D4, D5, T5 and T6 variants of the saloon and estate models, although only the former D4 and D5 are sold in the UK. Polestar recalibrates the powertrain, liberating an extra 10bhp and 37lb ft of torque from the two turbocharged four-cylinder diesel engines, reducing gear-shift times and improving engine response. A new sports air filter and freer-flowing stainless-steel exhaust system also make up the engine-based modifications.

> Click here to read all about the 592bhp Polestar 1

The chassis has been tweaked too with uprated springs and dampers, while bespoke 19-inch Polestar alloys, shod in performance-focused tyres, have been fitted to make the most of the sportier suspension setup.

Discreet visual touches inside and out differentiate the World Champion Editions from standard V60 and S60 models. The Polestar gear-lever is the biggest change inside, while the rear-diffuser and rear-wing constitute the most noticeable exterior additions.

Speaking about the new models, Christian Samson, responsible for Product and Development at Polestar said, “The engineers from Polestar and Cyan Racing have worked collaboratively on engineering developments for existing Polestar road cars for many years. It’s therefore fitting that we celebrate the remarkable achievement of securing our maiden World Championship by adding more performance to the cars that have been instrumental this season.”

The upgrades aren’t exclusive to the pair of celebratory editions and can be fitted to new or used V60s and S60s at Polestar outlets.