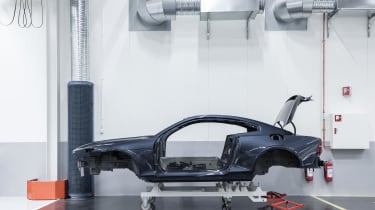 Polestar has released images of the first cars to emerge from its verification prototype production line ahead of full production beginning in 2019.

The carbonfibre-clad, 592bhp, all-wheel drive hybrid coupe will go on sale later that year, adding to the burgeoning ranks of electrified performance cars on the market.

At this early phase, the hand-built cars will be used for final testing before production begins in full at the company's facility in Chengdu, China. Duties include crash testing, weather testing, on-road assessment and fine-tuning, with 34 cars set to be produced at the Gothenburg prototyping facility. 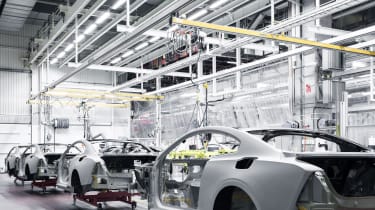 Priced from €155,000 (£135,000), the Polestar 1 will come in at around £10k more than luxury GT rivals such as the Mercedes-AMG S63 Coupe and only £20k less than a Bentley Continental GT. These big names might make the Swede look decidedly expensive, but the way it extracts its supercar-like power is a little more complex than a simple turbocharged internal-combustion engine, so too is its carbon construction.

The electric element of the Polestar 1’s hybrid powertrain consists of two electric motors that drive the rear axle through a planetary gear set. This enables torque vectoring with the two motors drawing energy from from a 34kwh battery and producing 218bhp on their own. The system also integrates an electric starter motor, and the Polestar 1 has a pure electric range of 100 miles – over four times that of the BMW i8.

Putting up the other 374bhp is a 2.0-litre twincharged four-cylinder petrol, driving the front wheels via an eight-speed gearbox. The combination of turbocharged, supercharged and electric power results in 592bhp and 737lb ft of torque. Polestar hasn’t quoted benchmark figures yet, but expect a 0-60mph time near four seconds.

Built on the SPA (scalable product architecture) platform underpinning the current large Volvos, the Polestar 1 casts a deceptively small footprint, measuring 650mm shorter than the S90 saloon – cutting 320mm from the wheelbase and 200mm from the rear body – and matching a Porsche 911 in length. Despite the SPA origins, almost 50 per cent of the platform is unique to the Polestar 1, including the carbonfibre-butterfly connecting the floor to the rear platform.

Compared to the S90, torsional rigidity is up 45 per cent and weight is down 230kg thanks to the bodyshell, largely constructed using carbonfibre, and weight distribution is 48:52 front:rear. The dieting efforts seem somewhat in vain, however, when you consider the battery and electric motors alone weigh-in at 230kg.

A sleek design, Polestar 1’s Volvo DNA is obvious throughout the GT’s looks, and those who remember Volvo’s Concept Coupe from the 2015 Frankfurt Motor Show will certainly be familiar with the shape. And while Polestar 1 has a very Volvo look to its appearance it will never badged as such, or rather it will never be sold as an S90 coupe with the electrified drivetrain removed.

Beneath the lightweight carbon body is an adaptive suspension system developed by Ohlins, called Continuously Controlled Electronic Suspension (CESi). An evolution of the Swedish company’s electronic damping technology, an electronic valve is positioned within the damper and constantly monitors both driver inputs and the road surface conditions to adjust the damping rate accordingly.  The driver can also change the damper settings from within the car should they wish through configurable driver modes.

Polestar has also approached a third party supplier for the brakes, too, with Akebono developing a set of a six-piston calipers and 400mm discs for the Polestar 1. Torque vectoring on the rear axle, a first for the Volvo Group, is also fitted. 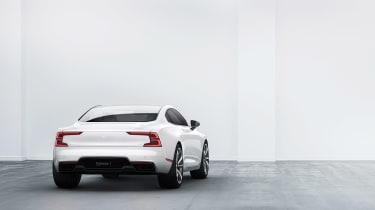 500 examples of the Polestar 1 will be built every year, and all will be left-hand drive due to the relatively small annual production numbers and the cost to engineer the car for both left and right-hand markets. However, it will still be available in the UK.

The forthcoming Polestar 2 and 3 models will be sold with both left and right hand drive options when they go on sale in early 2020. The Polestar 1 will be followed by the Polestar 2 – a Tesla Model 3 rivalling battery electric vehicle (BEV) – and Polestar 3, a battery powered performance SUV to rival the Model Tesla X. All three will be built in a new production facility in Chengdu, China.

You won’t technically own your Polestar, nor will you buy it from a traditional dealer. Instead, you will spec and order your car online and lease it for either two or three years with no deposit and a flat rate monthly fee. This fee will include insurance and maintenance and access to Volvo’s wider range of cars and accessories should you need something bigger, smaller or SUV shaped for a specific journey, with any charges added to your monthly invoice.

However, for those who still appreciate the touchy feely approach to car purchasing Polestar will open 80 Polestar Spaces around the world in key retail areas to allow customers to order their cars in a more traditional way. 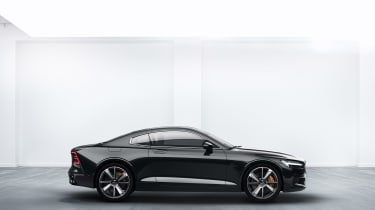 Due to its subscription based sales structure, Polestar hasn’t revealed a price for Polestar 1, nor a monthly figure but Jonathan Goodman, Polestar’s COO, has said the car would cost in the region of €130,000 should it be sold in a conventional way.

Polestar want to be leaders in electrification and will be instrumental in Volvo’s plans to build 1 million electric cars by 2025, with all new Volvo and Polestar cars launched after 2019 to be electric or plug-in hybrid vehicles. Polestar will continue to engineer existing Volvo models, which will be sold through Volvo dealers as 'Engineered by Polestar' cars.

> Click here for our review of the Volvo XC60 T5

“Polestar started two years ago when we showed the Concept Coupe at the Frankfurt Motor Show” explained Thomas Ingenlath, Polestar’s CEO. “ We looked at that car and knew we had to build it, but also saw it as an opportunity to do something different.” Set to be the most powerful vehicle to be built in China, work is due to start on the construction of Polestar’s new Chinese factory any day now with completion due in 12 months and the first Polestar 1 set to be built 12 months after that. With a current workforce of 100 people and a five-figure production capacity, Ingenlath and Goodman have no small task ahead of them.

Available to order now, Polestar deliveries will begin from the middle of 2019.