Not quite a rival for a Focus RS or Golf R, but a fast, useful improvement over the standard car 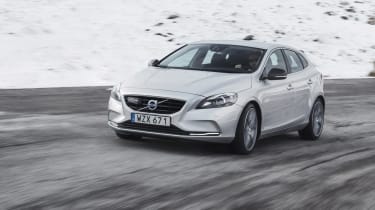 You’ll be hearing quite a lot more about Polestar from now on. Volvo has wholly owned this road car offshoot of the racing team since last summer, which means there’ll be more ‘Engineered by’ cars such as the likeable V60 Polestar of last year, a greater range of official Polestar remap software, and now also what we’re discussing here: official Polestar Performance Parts.

This V40 features the full gamut of Polestar improvements, for a more focused proposition than the standard V40 T5.

With the benefit of a Polestar remap, plus the unspecified contribution from a 2.5” stainless steel exhaust system and a ‘performance’ air intake, the 2-litre, four-cylinder T5 engine now produces an additional 8bhp to take the total to 250bhp. Mid-range power is even stronger, up by 25bhp at 3500rpm.

The changes also promise an additional 37lb ft of torque to realise a solid 295lb ft between 2000-3500rpm. An eight-speed automatic is the only transmission option on the T5. No official 0-62mph or top speed figures are quoted post-Polestar, but you can expect small improvements over the standard T5’s 6.4-second 0-62mph dash and 149mph max. 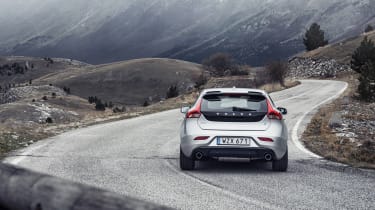 The new springs and dampers lower the V40 by 10mm and are 15-25 per cent stiffer than Volvo’s regular Sport Chassis option, depending on the variant.

Lighter 19in x 8in Polestar alloy wheels are combined with a set of 235/35 R19 Pirelli P Zeros, but the brakes remain unchanged. Other visual elements include a small kick to the rear wing (said to increase stability), a rear diffuser, and a Polestar gearknob and sill kickplates.

The exhaust note of this V40 is a useful metaphor for Polestar’s work. You actually have to flick the window switch to hear the difference, but at idle it has an unusual, attractive tone.

It’s fast too, with the emphasis on mid-range surge as the figures suggest. Drive it in the manner arguably expected of a 250bhp hot hatch and the standard T5 brakes soon start to show the strain, the pedal losing its bite and wisps of acrid smoke appearing once the car has stopped.

The suspension changes give it much more poise than the standard T5, without simply ruining the ride. Those 235-section contact patches do transmit some jiggle and noise, but the ride improves with speed, and the general body control of the car is very good, enabling the car to cover ground quickly.

The way it steers is disappointing though, and does the most to shatter the hot hatch illusion. Light, but then with artificial and one-dimensional weight immediately away from the straight-ahead, it’s almost impossible to know what’s happening at the front wheels save the noticeable dollop of torque steer when accelerating hard in the lower gears.

The gearbox can be frustrating, too, especially as the launch cars were inexplicably not fitted with Volvo’s £150 steering wheel shift buttons, so it’s just the gear lever – with up and down arranged the ’wrong way’ – to contend with, and despite a more sporting-minded algorithm by Polestar it has nowhere near the crispness and dependability of a good twin-clutch set up. 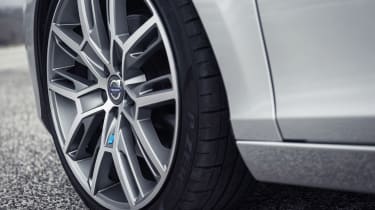 A standard Volvo V40 T5 starts at £30,175 in R-Design Nav trim, which already crests the asking price of a Focus RS (£29,995) and just undercuts a Golf R (£31,120). Both cars offer a driving experience that the Volvo simply cannot, but each also strongly appeals to a certain type of customer – and those considering the V40 may simply prefer the suave Swede to the animated American or the grave German.

Given the extra cost of Polestar’s parts - £4725 on the V40 if bought as a kit, with individual parts also available (the intake and exhaust is £1000, the suspension work £800, wheels £2325), the car will be a niche choice and a rare sight. As an example of Polestar’s ethos and competencies, it is, however, somewhat more useful.