The Volvo V40 has been with us now since 2012, so to keep up with Volvo’s strengthening product line up, it has been given a light refresh. The bulk of the upgrade comes in the form of a restructured trim level range and the adoption of Volvo’s Thor’s hammer headlight graphic.

Aside from the upgrades, which we will go into more detail about later, the Volvo V40 is an upmarket hatch offering that sits between mainstream family hatchbacks and full-on premium rivals like the Audi A3. It is based on the same platform as the Ford Focus, but where you may think that would gift the V40 some of the Ford's impressive handling traits, you would be mistaken.

The flipside is that the Volvo offers a well-built, safe and solid, if slightly cramped, alternative to other more common premium rivals. In R-Design trim, the V40 certainly looks the part and is becoming more visible as other new Volvo models further up the range grow in popularity.

The range is far reaching, even yeilding a lifted Cross-Country model, and offers a range of Ford derived four-cylinder petrol and diesel options. The V40 doesn’t feature Volvo’s latest engines seen elsewhere in the range and, despite the recent update, feels distinctly 'last generation' compared to the new XC90, S90 and V90. 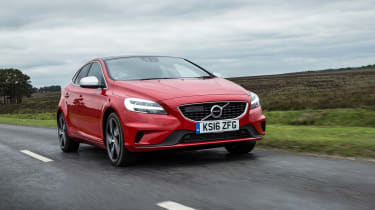 Performance and 0-60 time > The fastest Volvo V40 – equipped with the T5 engine – hits 62mph in 6.3sec. It is powered by a turbocharged 2-litre petrol engine developing a strong 242bhp.

Engine and gearbox > The engines for the Volvo V40 line vary heavily and escalate in power (T2, T3, T4, T5 for petrols and D2, D3, D4 for diesels). Neither manual nor automatic gearbox options are particularly enticing for drivers.

Ride and handling > The V40’s electric steering is linear in response and the gearing is consistent. You can really point the car’s nose at an apex.

MPG and running costs > The eco-star of the Volvo V40 line-up is the D2 diesel engine, which emits just 88g/km and officially returns a combined 83.1mpg.

Interior and tech > The V40 features tactile interior design materials with intuitive controls. The cabin is also of high quality, and in terms of tech this Volvo has all the safety features you could want.

Design > The V40 is still one of the sportiest looking cars in its class, looking especially sleek next to the likes of the Volkswagen Golf and Audi A3. 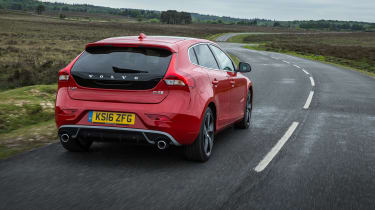 Prices start at £20,715 for the Volvo V40. That's in base Momentum trim with the T2 petrol engine. The entry-level diesel, the D2 in Momentum specification, costs from £22,575. As standard, Volvo fits its pedestrian airbag, City Safety, 16-inch alloy wheels, DAB radio with steering wheel controls, Bluetooth, climate control and those fancy LED headlights.

The sportiest V40s are badged R-Design and they have recieved an overhaul inside and out with the facelift. Those with money to burn can upgrade either R-Design or Momentum models with Nav Plus packs that include Sat Nav (obviously) but also a head-up display, rear park assist and cruise control.

In line with other Volvo models, a range topping Inscription trim is available that brings extra lashings of chrome, high quality leather seats and new alloys with it. Although the interior is starting to look its age, there is no denying the excellent build quality that still shines in more modern company.

The V40 Cross Country is avaiable with the T3 and T5 petrol engines and D2, D3 and D4. Prices start at £23,555 for the T2 Cross Country. An extra £850 adds Volvo's seven-inch Sensus Navigation system with online connectivity ability - for models where it isn't standard fit.

Key rivals to the Volvo V40 include the Audi A3, Volkswagen Golf, Mercedes A-Class, BMW 1 Series and for those on a budget, potentially the Ford Focus and SEAT Leon. The 1 Series leads the way for driver enjoyment, with the Audi taking the win on interior build quality. What the Volvo does best is driver assistance and safety, as well as being an outsider's choice for those looking to avoid the typical German options.

> Click here to read our review of the BMW 1-series