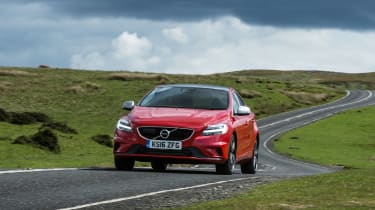 The eco-star of the Volvo V40 line-up is the D2 diesel engine, which emits just 88g/km for a Benefit in Kind tax rating of just 14 per cent. It officially returns an astounding 83.1mpg on the combined cycle too. The D3 isn't quite so impressive, as its 114g/km emissions rating means an 18 per cent BIK rating and a little road tax each year (only £30 admittedly). The 65.7mpg economy figure isn't bad, however.

Saying that, the more expensive and more powerful D4 engine reveals what Volvo has in store, as it returns 74.3mpg and comes with an emissions rating of just 99g/km. That means just a single percentage point higher BIK than the (much slower) D2 model and no annual road tax. 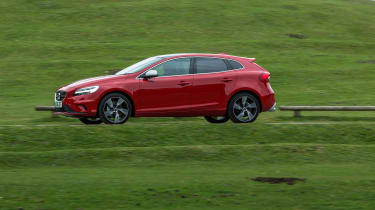 While high mileage drivers are likely to stick with diesel power, they shouldn't automatically assume that the petrol V40 models are profligate in their use of fuel. Both T2 and T3 engines emit 124g/km and return 53.3mpg, while even the T4 version ducks under 130g/km and comes with an official 51.4mpg economy rating. Naturally the range-topping T5 version uses a little more fuel, returning 47.9mpg and emitting 137g/km.

The Cross Country model isn't far behind, emitting a few extra grams of carbon dioxide and covering a few less miles per gallon on a model-for-model basis. The all-wheel drive T5 variant is, however, the thirstiest car in the whole range, returning 44.1mpg and emitting 149g/km. It's likely to remain a rare sight on British roads.